This weekend was - in a word - rough.

We drove up to Charlotte to see J's parents and let them spend some time with the munchkin (and to go to the Panthers game).  I thought he would sleep most of the ride up since it was during his normal nap time at daycare. 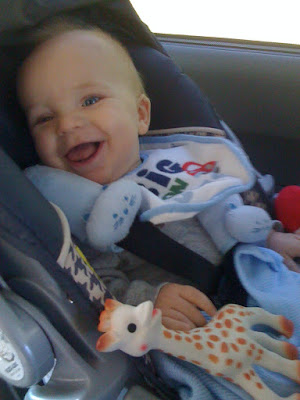 That night he was sleeping in the pack-n-play in our room.  I use the term sleeping loosely.  He was up every 3 hours (midnight, 3:30 and 6:40).  And making lots of noise at all other times.  By the time we got up in the morning J and I were both exhausted and I was in tears because my supply had clearly tanked.  Damn flu.

I sent J out to get me some Mother's Milk Tea and to pick up some formula.  I burst into tears at the thought of him having to get formula because I felt like a failure.  But the most important thing is that Andrew is getting enough to eat - no matter where it comes from.

J got back with the formula and we mixed some up. Andrew refused to eat it. He made his gaggy face, started crying, and turned away from the bottle.  I guess after almost 7 months of nothing but my milk he didn't want anything else.  A little part of me was relieved because it meant that he still would prefer me, but I was also panicking because I didn't think I had enough for him and he needed to eat.  We were able to mix it with some breastmilk and eventually get him to eat it.

J's mom was able to finally get him to nap, too.  Of course he hadn't been sleeping all that long when J's crazy bitch aunt and his grandma showed up.  My mother-in-law took him into another room where it was quiet so he could continue to nap, but Roberta (the crazy bitch aunt) was impatient and after a little while went in demanding "Is he going to sleep the whole time?".  When I heard about this I wanted to punch her in the face.  WTF is wrong with her?? You don't wake a napping baby. Especially one that didn't sleep well the night before. And especially when it's NOT your baby.  This woman has zero common sense and I truly just can't stand her (This goes back to her ruining our wedding for J's mom - I resent her for that and really can't stand to be around her).

After dealing with them for several hours they finally left at 5:30.  Andrew got an early bath and I fed him and had him in bed at 8:00.  He had been moved into another room and J's mom said she would get up with him at night and only get me up if he needed fed.  I stayed up for a little while and we were looking at pictures of J when he was a baby and comparing him to the munchkin.  Some of the similarities were eerie  :)

A little after 11:00 Andrew was back up.  I heard him and went and fed him and had him back sleeping in the pack-n-play by midnight.  Once he was down I went back to bed, crossing my fingers that he would make it through the night.

At 7:00 when I got up to go the bathroom I checked on him and he was wiggling a bit, but not crying. I let him be and we heard him around 8:00. It turns out that he had been up at 4:30, but my mother-in-law had taken care of him because she wanted me to get some rest. I am eternally grateful for that because I felt much better. I was even able to pump 6 ounces for him so there was almost 12 ounces of milk for him for while we were at the game.  We figured he could have 5 oz of mik mixed with 2 oz of formula and that would give him the 7 oz bottles that he's used to.

J and I headed out to the tailgate that we were supposed to go to. A guy he used to work with invited us to this game because he has season tickets. He had wanted us to go last year, but J had his shoulder surgery and was out of commission.  I was worried about getting engorged and being uncomfortable so I took my pump with me in the car. I pumped quickly right before the game and got 5 oz.

The weather was beautiful and we had great seats: 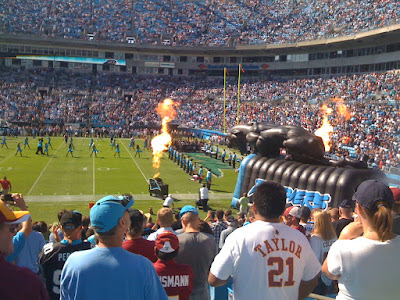 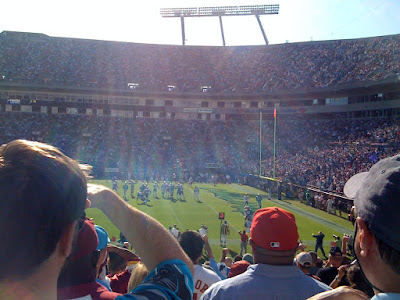 After a successful game with a win for the home team we hightailed it out of there to get back to the house and pack up. I pumped while J drove and got another 6 oz (yay!)

When we got to the house the little munchkin was in great spirits and I was so happy to see him. Even though we'd only been gone 6 hours it felt like so much more.  We got on the road and I had to feed him a bottle in the car, but then he passed out before we got to Columbia and slept the rest of the way to Charleston.

Unfortunately we didn't get home til 8:45 and he had just slept an hour and forty five minutes.  After his quick bath he wasn't ready to sleep yet, so J played with him while I took a quick shower to get the funk of the day off of me.  Finally at 9:55 he settled down to eat and was in bed at 10:30 (two hours past when he's normally down).

I was half tempted not to pump since I figured he would be up in 3 hours to eat (like he had done the past two nights), but I did anyway. I'm glad I did since I got 4 oz (to go towards tomorrow's bottles) and he didn't get up until 6:15 this morning.

So now it's Monday and I'm back at work after being out most of last week.  I'm drinking my tea like crazy and guzzling water in a desperate attempt to get my supply back to where it needs to be. I need to pump 17 more oz today to get his four bottles for tomorrow. I'm praying that he is getting back into his routine at daycare and that he eats enough during the day today that he won't be up tonight.  Fingers crossed!
Posted by kjw at 10:39 AM