Another too fast weekend

Yet another weekend that went by way too fast.  How is it that those two days always seem to go by in about two seconds?

Friday night we didn't do much. Thought about going and trying out the new PF Changs that just opened, but opted not to since it JUST opened.  We had a feeling it would be super packed, which would translate to a long wait, which does not go well with a 6 1/2 month old that needs to be entertained.

Instead we stayed home, had some pizza, and tried some avocado with the little man: 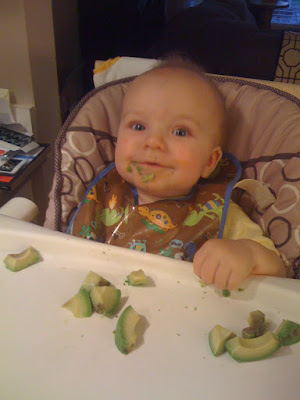 He did great with it this time and actually got a few pieces into his mouth. It was all good til the gag reflex kicked in and he proceeded to throw up. Luckily he had on one of those plastic bibs with the pocket at the bottom and it caught most of it.

Saturday morning we got up and did the Race for the Cure on Daniel Island.  This was my first race post baby so I wasn't sure how it would go. Plus I was pushing the munchkin in the jogging stroller.  Obviously I was several minutes off of my best time, but this race is always really crowded and trying to maneuver the stroller on top of that made for not the most impressive finish. I did pass a whole heck of a lot of people and even got a little shout out at the finish line for being the second stroller to cross (I even got a "Go mommy!!" yell).  Oh, and I only hit one guy with the stroller  :) 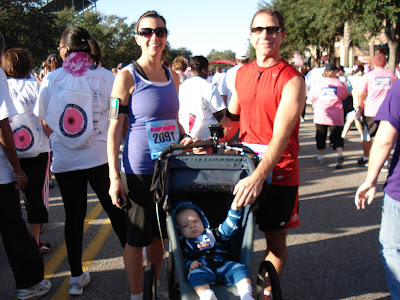 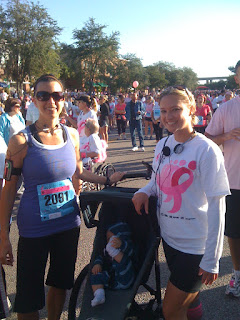 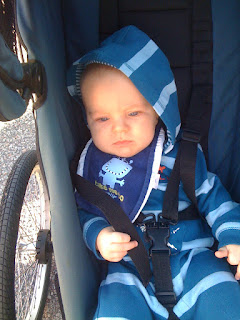 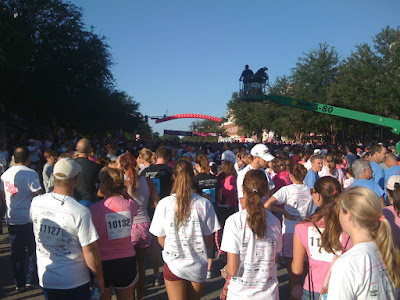 After the race I went and met some friends with the munchkin for lunch at Taco Mamacita. All I can say is YUMMY!  And he did great while we were there. Once we got home he took a nice two hour nap while I watched my football game.


Once he got up we went and met some friends at Red's to hang out and grab some drinks. Yeah, I know what you're saying. "They took their baby to a bar??"  We were sitting outside on the deck enjoying the view of Shem Creek and as soon as he got fussy I left and took him home for bathtime.  Of course I forgot his Sophie on the table and our friend, Jay, proceeded to use it to try to pick up chicks.  (Sophie has since been sterilized). 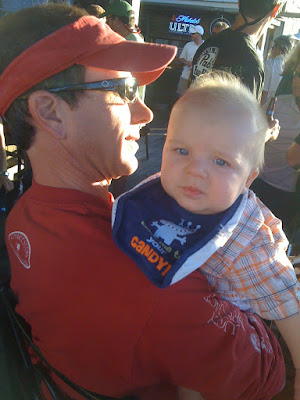 Saturday night he slept over 11 hours (yay!!) and we had a nice day just hanging out yesterday. We did a little photo shoot prior to my football game: 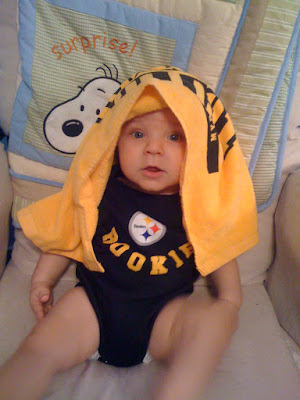 Then he spent some time shredding some newspapers in the living room and hanging out with daddy: 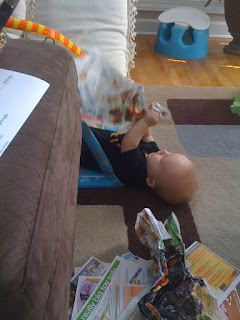 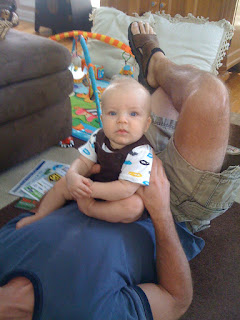 So, it was a somewhat busy, somewhat lazy weekend and I enjoyed every second of it.  And Andrew was all smiles on the way to daycare this morning - I guess he enjoyed his time with mommy and daddy, too. 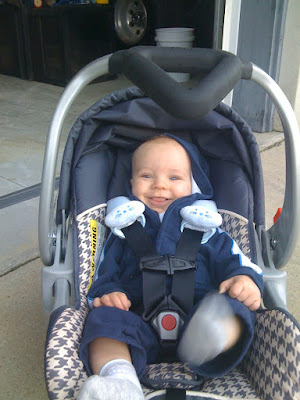