Baby fever - and the fears that brings up

Ok, I have to admit - lately I have been struck by some big time baby fever.  I don't know if it's because my best friend just had her baby girl and now I'm seeing all these pictures of an adorably squishy newborn.  Or because I had to pack up more of the clothes that are too small for Andrew and it makes me realize how big he's getting.  Or because he is no longer a tiny snuggly cuddly baby who would sleep on me for hours.  Or just because he is so damn cute that I want another one just like him.

Whatever it is, lately I have been daydreaming about being pregnant again.  It doesn't help that for the most part I really enjoyed being pregnant - 9 months of ridiculous constipation notwithstanding.  Along with those daydreams, though, there have been some fears and concerns.
So anyway, those are some of my fears and concerns about having baby #2 - even though I am itching to give my munchkin a sibling.  I know it is more than likely that there is a baby #2 in our future, I'm just not sure how far in the future.  Of course I still haven't even had my first post partum period so who knows how wacky my cycles are going to be once that comes back.

And really, when I look at this face 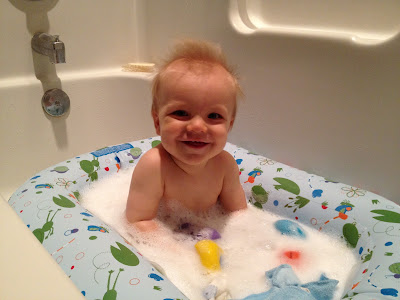