This weekend was not what I was looking forward to all week. I love weekends because it means I get to spend two whole days with my little munchkin. So of course last week I was eagerly anticipating it.  Then Thursday afternoon I got an IM from J:

"Elizabeth sent me a text - Robert has a tennis tournament this weekend."

Instantly I was pissed.  You see, Elizabeth is J's cousin and Robert is her 17 year old son. They live in Myrtle Beach (around 2 hours from here) and he plays in these tennis tournaments. Well, the first time she asked if he could stay at our house when he had a match we said OK.  It didn't make sense for him to drive back and forth between home and Charleston.

That was back when I was pregnant and while I wasn't thrilled about dealing with a teenager all weekend it wasn't that big of a deal.  And if it was just an occasional thing I wouldn't complain (at least not much).  But now Elizabeth seems to think that our house is a free bed and breakfast that she can send her kid to at her convenience.  I don't have a problem helping out every couple months or so, but he has been down here once a month for the past 4 months.

Before you go judging me for being a big meany, let me give you some background.  Elizabeth is crazy. Roberta (Elizabeth's mom) is even crazier.  They both caused so much drama with mine and J's wedding that  my mother-in-law was in tears at our wedding and had a miserable day. I will never forgive them for ruining her son's wedding for her.  Elizabeth is a divorced mom of 4 kids (one of which is from some random dude) who is incapable of living within her means.  That whole side of the family likes to think (and act) like they are some hot shit when in reality they are nobodies.

Anyway, he got here Friday evening, which meant when I needed to pump before bed I had to go upstairs because I'm not whipping out a boob in front of a teenage boy.  Saturday morning I come downstairs to get the baby and Robert is sitting there polishing off  my Cheerios.  And he left his bowl in the sink - two feet from the dishwasher.  He was gone when I got back from hot yoga and didn't get back until J and I were out doing some errands later.  When we got back I needed to go feed the baby and pump, so I was upstairs. I heard J making several trips down to the car to get all of our stuff from Costco while Robert sat on the couch watching a movie, never bothering to ask if J needed help.  I had a bunch of cookies on the counter from our pot luck lunch at work on Friday and those steadily disappeared during the weekend.  Yesterday he left for his match at 9:30, but came back at 10:30 and promptly changed the TV to the movie he was watching earlier, never asking if I was watching it (I was upstairs gathering up laundry).  I was irritated and took the baby back in his room and played with him and nursed him before putting him down for his nap. Thankfully he was gone again when I went back out, but my half full pack of tic-tacs that was sitting on the counter now had one left in it.  While the baby was napping I was sitting in the living room going through the Sunday paper and I glance down to see cookie crumbs ground into the carpet.  J happened to have just gotten home from the gym and I commented that if Robert was going to eat all of our cookies he could at least not track the crumbs all over the house (mean, I know, but by this point I was fed up).  Robert came back after his last match, drank my last diet coke from in the fridge (throwing the can in the trash again even after we had mentioned several times that we recycle), took a shower and finally left at 3:45.

So my entire weekend was jacked up because J's batshit crazy cousin thinks it's ok to pawn one of her kids off on us anytime she wants.  J and I have both had enough. I am so tempted to send her an email (I don't have her number) and let her know that this is not ok, but I won't.  I don't need to cause any more drama with those crazies.  But the next time J gets a text from her because Robert has a tennis match I think that there is going to be no room at the inn.

At least I had this little cutie to cheer me up when I was getting irritated: 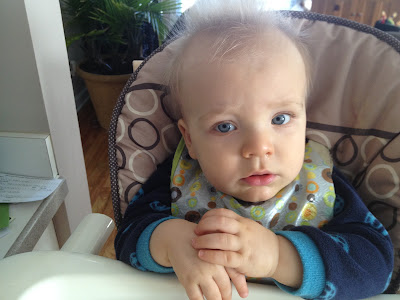