Oy.  Just when I think we are making progress we seem to take steps back.

Back when we first started more finger foods and the chunky stuff it was a total puke fest.  Every time a chunk would get anywhere near the back of his throat he'd give me gag face and promptly regurgitate the offending piece - along with whatever else had made it into his stomach.  The past week or so we have made some progress.  He has been making the chewing motion with some of the little pasta chunks in his food and was even chewing on a piece of broccoli at dinner  the other night (he appeared to chew all the juices out of it and then spit out this shriveled chunk of broccoli - gross).  He's been devouring food like it was his last meal.

Until a couple days ago, that is. It started this past weekend. I was trying to feed him dinner and he would take one bite and then refuse to open his mouth. All he would do was grab at the spoon, get the food all over his hands and then proceed to rub it all over his face, his hair, the tray and his clothes.  I thought maybe he was done with being spoon fed so I gave him finger foods.  Those all ended up either in his seat or chucked over his shoulder onto the floor.  Maybe once ever third meal would he cooperate and actually eat.  I mean, he'll go to town on some goldfish crackers or cheerios, but that isn't exactly nutrition.  I'm starting to worry that he isn't getting the nutrients that he needs.  Of course he is still getting 18 oz of breastmilk at daycare every day, plus nursing in the morning and a bottle of formula before bed so it's not like he is starving. But I feel like he should be more interested in eating other foods and better able to eat textures without throwing up.

Oh, and he has another fun trick. I feed him the stage 3 foods that have little pasta balls in them. Well, he has started to just swallow the liquidy part and store all the pasta balls in his cheeks like a chipmunk until he gags and spits them all out.  It's fun stuff, let me tell you.

Ugh - I know eventually he'll grow out of this.  I mean, he won't be eating pureed food forever.  I just feel like we are not making progress. I read about these other babies and the foods that they eat and I can't help but think I'm doing something wrong.  I guess this mommy thing is going to be a learning process forever, huh?

At least he's finally figuring out what to do with a sippy cup: 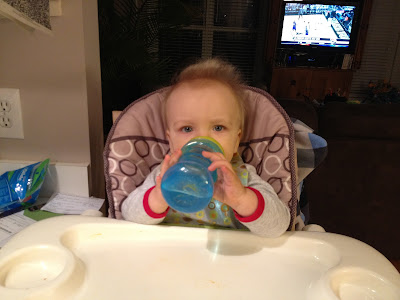 Hopefully while I am home with him the next 4 days we'll get somewhere with the whole food thing. Who knows - maybe by this time next week I'll be complaining that he's eating everything in sight and I can't keep him satisfied.  Fingers crossed....
Posted by kjw at 12:32 PM