And here I thought that once the munchkin hit one that time would slow down a little bit. Not so much.  This past month went by in the blink of an eye and here we are already at 13 months old.  It's crazy how time has gone by so quickly.  I cherish every day that I spend with him - even when he is driving us nuts! 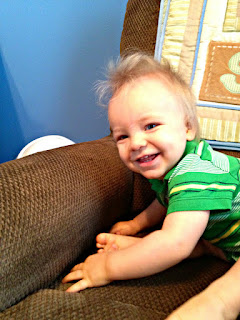 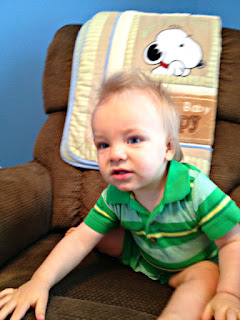 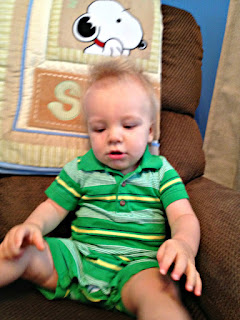 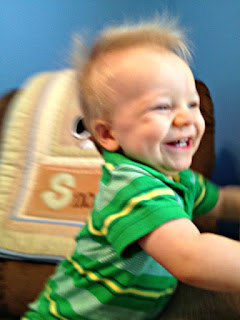 This is what it's like trying to get a picture of a spastic 13 month old  :)

Size (diapers, clothes, etc.):  Not too much of a change.  He wears size 3 diapers with no leaks. I haven't tried a 4 on him yet to see how big they are, though.  He is in mostly 12 month clothes, though some 9 month onesies and bodysuits still fit.  All 12 month footie pajamas and I just bought him some 18 month ones since he seems to be getting too long for the 12 month ones.

Sleeping:  Still sleeping like a champ (10+ hours a night) with normally two naps a day.  Sometimes he rebels against nap #2 on the weekends, but for the most part he'll still take it.  We are very blessed.

Eating: I BF in the morning still, but this mommy is about tapped out.  I pump in the evening and am now only getting about 1.5 ozs.  I've been sending 3 bottles with 5 oz of whole milk and 1 oz of breastmilk, but starting tomorrow it may be all whole milk. As long as it's warmed up he'll drink it. Still resisting milk in the sippy, though. May need to get tough on that this weekend. Eating still kinda sucks.  I've kind of caved and started pureeing down some of the foods that I bought for him before just so we can get him to eat it. I know it's a step back, but he needs to eat.  Oh, he had funnel cake on Tuesday at the farmers market and loved it.  Yep - he loves fried goodness.  He did eat a couple penne noodles last night, so at there there was that.  This morning he had some greek yogurt and fruit. He loves greek yogurt.

Milestones:  One more tooth on the bottom for 8 total now. No real sign of the one year molars, but I'm dreading them since I've heard that they suck.  Still not interested in walking - not even cruising.  I'm not worried (yet) but I wonder when he'll start.  He has started really babbling and it sounds like he is talking with all the inflections. It's hilarious to listen to.  The only things that sound like words are "mama" and "dada".

New adventures:  Nothing too exciting happened this month besides his birthday party.  This weekend is my company picnic at a local mini-golf/amusement area so that should be interesting.

Favorite toys and activities:  He'll spend 30 minutes chasing a beach ball all over the house and he loves his stuffed armadillo that I bought him in Dallas before he was born.  Oh, and his favorite toy is my phone - that's the first thing he goes for when he sees it.

Funny happenings:  While it was pretty messy, his chocolate thieving from this past weekend was pretty funny. Our little outing to the farmers market downtown two weeks ago was also very fun. He loved standing there dancing to the music. Oh, and he loved playing with the balloons from his birthday party after they lost their helium.

What I'm looking forward to:  More trips to the farmers market and going to the Blessing of the Fleet this weekend.

13 months of craziness down and a lifetime to go  :)