Another Whirlwind Weekend with the Munchkin

Another weekend come and gone - and a busy one at that!

On Friday afternoon J left to go do a 100K bike ride up in Brevard, NC.  So that night it was just me and the munchkin.  He hung out in his little trike and watched while I let the dogs out and watered the garden.  He is sitting there holding onto his armadillo toy that I bought for him in Dallas when he was still in my belly. 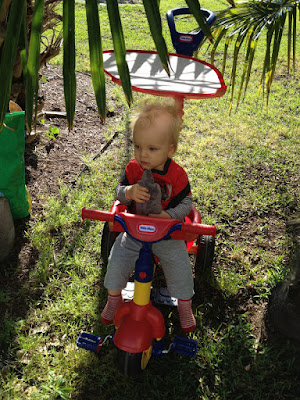 That evening we hung out, had some dinner, did some playing and then it was time for the bath: 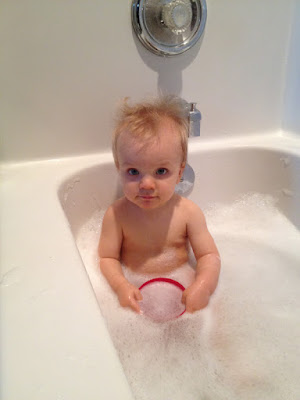 He's got the nice 'Flock of Seagulls' hair going on there

Saturday morning we got up and had a little breakfast before we headed downtown to the farmers market. I got there at the perfect time and got a parking space just as someone was leaving.  I was thrilled to not have to try to squeeze my big ass car into a parking garage.  We walked around, I bought some produce and got us a cinnamon sugar soft pretzel and big fresh squeezed lemonade to share.  We found a spot on the lawn (note to self - bring a blanket next time) and listened to the music.  Andrew shared some of my pretzel and did a little dancing: 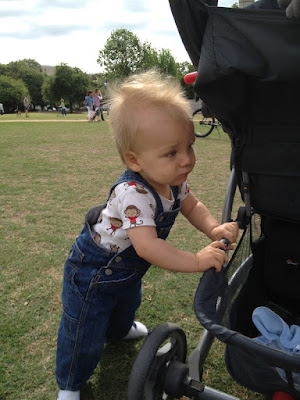 Thankfully he still isn't walking so I didn't have to chase him too far, unlike one of the other moms who kept running past us chasing her little boy.  It was pretty amusing.

Later that day, after his nap, we took a trip to Target to get him some stuff (and spend the giftcards he got at his birthday)  I was able to get him a bin for his bath toys, the ducky faucet cover and a penguin that blows bubbles for the tub.  He's not too sure about the penguin just yet: 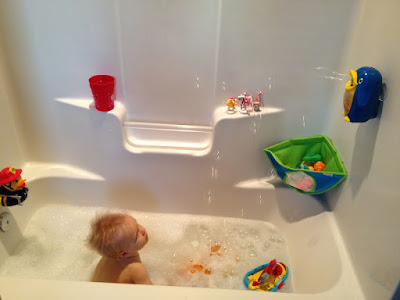 J got home around 6:00 so he had a few hours to hang out with the munchkin before it was time to get him to bed.

Sunday morning we had a little family time and hung out on the deck with the pooches.  Andrew decided to taunt Baxter with the tennis ball chucker.  Baxter was content to chew on his bone: 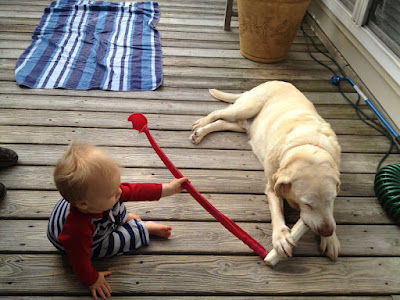 In the afternoon we got motivated to try to put the hand me down bike seat on my bike.  Unfortunately it was missing some parts, so the munchkin and I headed to Wal-Mart for a new seat and to get a helmet for him.  After about 90 minutes (and some barely contained profanities) we got the bike seat on and took it for a spin: 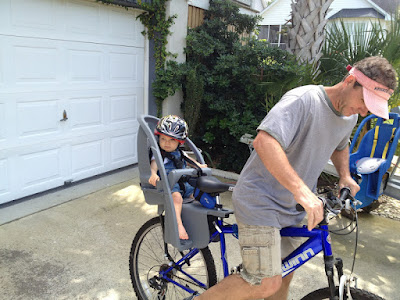 Andrew isn't overly amused by his helmet. I need to work on the straps to make it fit better on him.  Or his noggin needs to grow a little more. 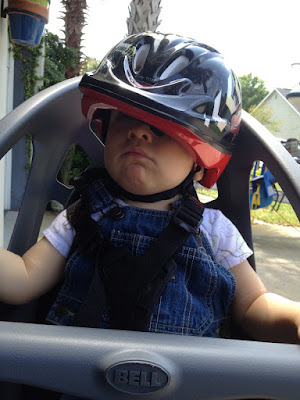 So, it was another fun filled weekend with my little buddy that was over in the blink of an eye.  Now I'm sitting here at work looking at the calendar and counting how many weeks until Memorial Day (and my next long weekend). Ugh - five more weeks. Can't come fast enough...