We Should've Named Him Dennis

I love my little munchkin more than anything, but holy hell was he a handful this weekend!

Saturday afternoon I was playing with him in the living room while also trying to read the paper.  He was playing with the plastic Easter eggs in his bucket from daycare (yes, we are slackers and haven't put them away yet).  I wasn't aware that he had gotten the one egg open until I looked at him and saw him sucking on something.  He had popped the entire foil covered chocolate that was inside the egg into his mouth and was none too pleased when I fished it out and took it away.  Yes, I realize we should have removed the chocolates before this happened, but we didn't.

After his tantrum about the chocolate he settled down and decided that if he couldn't have the chocolaty goodness he would entertain himself with my phone.  I had it sitting up on the arm of the couch out of reach, or so I thought.  He reached up and grabbed it when I wasn't looking.  It wasn't locked and even though he didn't know what he was doing he got into the my messages and sent an unintelligible  "Hzjsjxjsjjbsh" text to my sister.  I took the phone off of him and put it up on the arm of the chaise and carried him across the room to play with some toys.  The instant his little butt hit the ground he stormed across the room back to my phone.  This was the beginning of his favorite game - get mommy's phone no matter what!

That evening we dropped him off with Andrea (our daycare provider) because she was doing a 'Parent's Night Out' for anyone who wanted to use it.  Since J and I rarely ever have a night out just the two of us we took her up on it and went to see 'Hunger Games'. At 10:30 when we picked him up I was anticipating an epic meltdown since we'd have to wake him up.  Nope.  He woke up with a smile and was raring to go. We got him home and he obviously thought it was play time. He spent the next hour crawling all over the house like a maniac, pulling clothes off of the drying rack, tossing toys around the living room  and basically being a spazz: 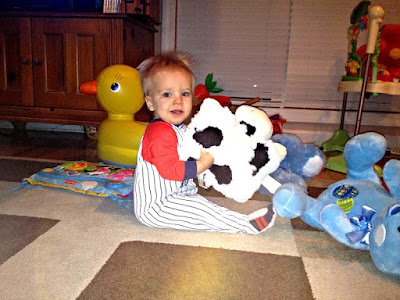 Thankfully we got him down a little after 11:00 and he then slept until 10:00 AM the next morning.

Yesterday he woke up recharged and ready to go. While J was putting laundry in the washer the munchkin busied himself trying to pull it all out. A few minutes later when I noticed a stink I took him in his room for a diaper change.  Before I could block him he reached down and grabbed a handful of poo. Ugh!!

After a scrubdown and an outfit change he was off to cause more mischief  I caught him in the foyer attempting a jailbreak: 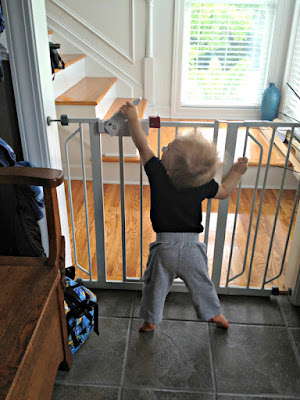 .
Clearly we need to start locking the gate.

I took him in the living room, blocked off one exit with the ottoman, and let him play. 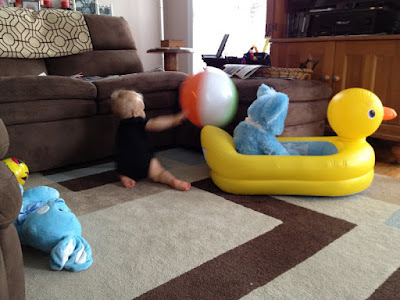 He spent the next 20 minutes chasing a beach ball around the house, which was actually pretty comical.  When he got bored with that he was playing in the living room and being suspiciously quiet.  We soon found out why.  J went to see what he was into and found his face and hands covered with chocolate with a piece of foil sticking out between his lips.  Yep - he found another chocolate that we somehow missed.  While J held him down I fished out the chocolate and grabbed some wipes to clean off his face and hands.  J grabbed a dish cloth and wiped down the window in the living room that Andrew had smeared with chocolate.  Afterwards there was another mini tantrum: 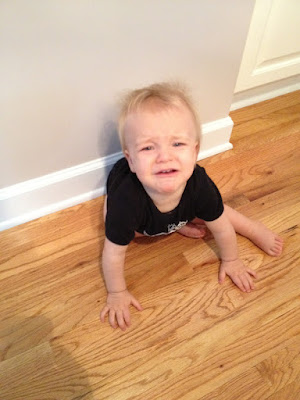 We plopped him in the living room and I laid at the other exit to keep him contained.  He was happy playing with his toys and crawling all over me like a spastic little monkey (which is the norm!).

We had dinner while attempting to get him to eat, but he was more interested in seeing how much distance he could get with his potatoes.  He has quite the arm.

During bath time I had some fun with the bubbles: 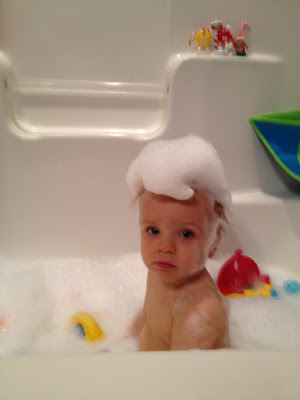 He looked like Elvis with some bubble hair.  He was relatively behaved during his time in the tub, but when I tried putting his toys away in preparation for rinsing him off he decided that it was a game and quickly pulled every toy out. He had shown no interest in playing with any of them until I tried to put them away (of course!).

I got him back to his room after bath time and before I could diaper him he pulled out an old trick and pee'd on the floor. Awesome.

Needless to say, we were both a little relieved once the munchkin was fed and plopped in the crib to go to sleep. Our own personal Dennis the Menace - man can he be exhausting!