Toddle Along Tuesday ~ A Day in the Life

This week's topic for Toddle Along Tuesday is "A Day in the Life".  Not that we lead an overly exciting life or anything, but I thought I'd share anyway.

My weekday starts at 5:55 AM when my alarm goes off.  It used to be 5:42, but since I stopped pumping in the morning I gave myself an extra 13 minutes now.  I stumble into the bathroom, take my temperature (AF did finally show up last Friday so I am getting back into charting just for the hell of it), wash  my face, brush my teeth and put my contacts in (I shower at night). I get dressed and start getting ready, pausing around 6:15 to wake J up.  I finish getting ready while he showers then I head downstairs to get all my stuff gathered up for the day.  I run all my bags down to the car and come back up to J waking up the munchkin around 6:55.  He is generally not thrilled to be woken up.

J leaves for work after letting the dogs out while I nurse the munchkin. I change him out of his pee filled diaper and get him dressed for the day then we head out to the kitchen so I can get him some breakfast.  I should probably just take his breakfast to daycare with him and let him eat there, but I feel bad pawning that off on them and I kind of like our breakfast time together.  So he eats some fruit and cereal while we "talk". 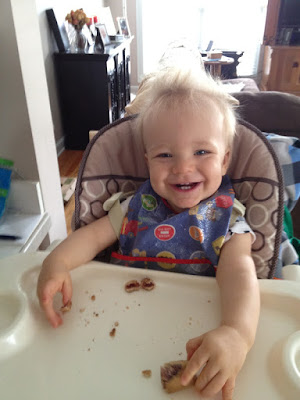 How could I pass up seeing this in the morning?

Normally during breakfast I see 'poo face' so I go change him (again) before we head out the door.  On a good day we are out the door at 7:30ish.  This morning was 7:32 - and that was even after an epic poo filled diaper.  Still amazes me that that much poo can come out of one little body.

I drop him off at daycare and chat with Marc and Andrea for a few minutes.  I get my last hugs and kisses from the munchkin and head to work.  Again, on a good day I can there around 8:00. From 8:00 until 4:00 I work. Sometimes I go grab lunch, but more often than not I bring my lunch and eat at my desk.  I like being able to go straight through so I can leave a little earlier. And since I am no longer pumping at work I am able to get my hours in faster.  I am normally out the door by 4:30.  If I get out a little earlier I'll head to the gym for a quick workout. On days I pick up the munchkin I pick him up between 5:00 and 5:30 and we head home.

I'll push him around in his trike for a little bit: 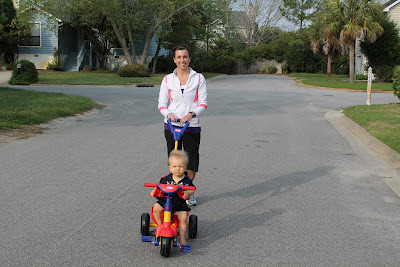 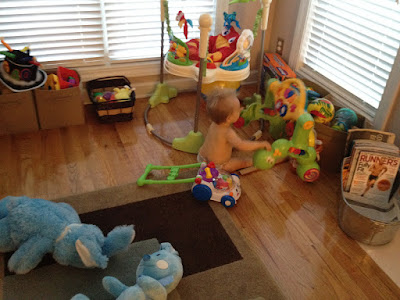 If J isn't home yet I will take the munchkin upstairs with me and he gets to play in the bathroom while I shower.  It's kind of funny to shower while this is staring at you and licking the glass: 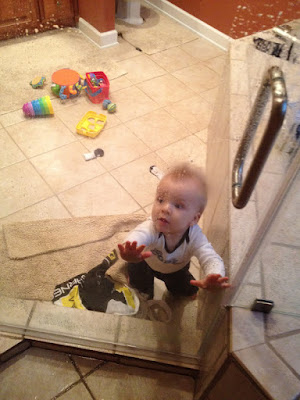 Then we'll head downstairs and I start to make dinner while he sits in his highchair and eats his.  Finger foods are still a crap shoot, but last night he ate at least 10 chunks of chicken tenders (each tender was cut into 6 pieces) in addition to the jar of whole wheat garden vegetables.  He busied himself swinging a steamed green bean around while J and I ate a quick dinner.

Around 7:00 it's tub time. We finally have him just in the big tub and the goal is generally to keep him IN the tub.  He likes to try to climb out and I spend most of his bath sitting him back down and cleaning up the water that he flings over the side.  I also try to keep the no-slip fish in place, but he likes to pull them off and play with them: 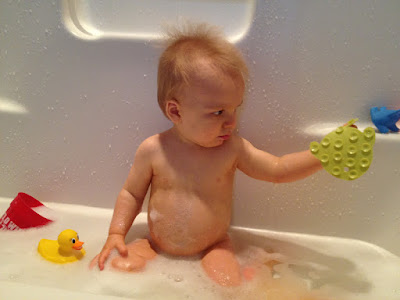 While I'm handling bath time J is out in the kitchen cleaning up after dinner.  Or sometimes he does bath time and I clean, it all depends.

After the bath we go in his room, dry him off and attempt to get him dressed.  He rebels against getting his diaper put on and his jammies, but once they're on he is content to play with daddy for a bit while I go make his bedtime bottle. Once he's done playing he starts to melt down. This signals that it's time for bed: 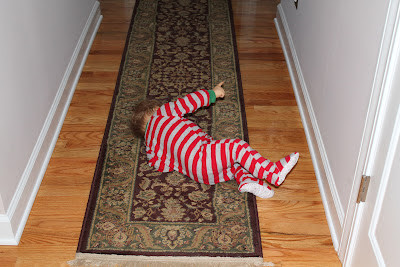 He gets his bedtime bottle and is in the crib, normally by 8:15 at the latest.  Once he's down for the night I go and get stuff ready for the next day - pack my lunch and get everything ready for the munchkin for daycare (food and milk).  I am still pumping at night since we are transitioning to whole cow milk and I have been mixing it with some breast milk.  So I spend 30 mins using my little single electric pump while checking email and playing games on my tablet.  I get all that cleaned up and relax for 45 mins or so before going to bed around 10:00.

Like I said, not overly exciting, but this is our life.

So what about you?  What does your typical day look like?  Head on over to Growing Up Geeky and link up for Toddle Along Tuesday!