My best friend's wedding - the result 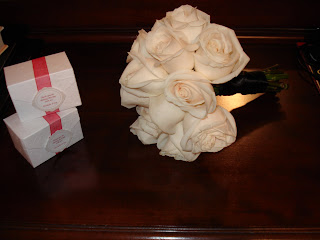 The rehearsal was Thursday evening at 6:00 at the church. I have to say this wedding was way more complicated than ours last May. We were in and out in a total of 15 mins for our ceremony (and that included the processional and recessional!). This was a 45 minute deal with standing, sitting, a little praying, no singing (thank goodness), and lots of instructions. Good thing I wasn't the maid of honor - I never would've remembered everything.  So we wrapped up the rehearsal and headed to the dinner at the North Harbor Club on Lake Norman.  Dinner was excellent and I think I drank my weight in ginger ale.  After that we headed home and J watched the rest of his NC State football game while I went to bed.

So the wedding was on Friday night at 7:00. I drove up to her house around 4:00 to get my hair done since I had no idea what to do with it. Her tattooed hair/makeup girl worked her magic pretty quickly (I had already spent almost 2 hours curling my hair back at the house) and I got dressed in my dress that still fit just fine. Then I drove the bride to the church and we hung out with all the girls in the bridal party in the bridal suite while we waited for the guys to show.  The flower girl was about the cutest thing ever - and such a ham!  I can't wait to see some of those pictures.

The ceremony itself was nice. Thankfully we got to sit for a bit of it so it wasn't too painful.  I had new shoes on and may have picked heels a little to high.  On the ride to the reception in the limo they broke out the bubbly while I sipped my Sprite in a champagne flute.  We were introduced, they did their dance, and then it was time to eat. I was starving and loaded up on the grub - meaning I was kind of stuffed afterward.  After dinner was cake, more speeches, and some dancing.  I didn't really join in the dancing due to the late hour (dinner was at 9:00) and my aching feet.  The reception ended around midnight (yeah - kind of late) and those of us that remained lined up with some sparklers for their big exit. I think some people met them out afterward, but I was beat and we had a 40+ minute drive back to the in-laws house so we headed out.  We didn't get home til almost 1:00 AM and I still had to dig dozens of bobby pins out of my hair. It reminded me of the Looney Tunes Witch Hazel where she always had hairpins flying out of her head.  I got them all out, attempted to brush my hair, gave up and hopped into bed. It was a very long day - even if I wasn't pregnant!

Here are some pictures - I sucked at having my camera out  :( 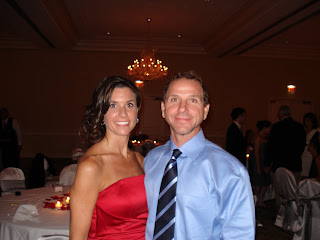 Me and J after dinner 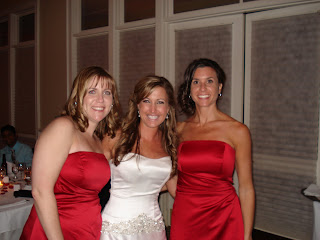