And we have another tooth

Yesterday I noticed that Andrew was even more chewy than normal (which is saying something since he already chews on whatever he can get in his little mouth).  On the car ride home from daycare I could hear his gums squeaking on the rubber of the giraffe toy I had for him and then when he was in his high chair he was gnawing on the end of one of the straps.

I kept trying to get a look at his little gums, but he wasn't being the most cooperative little munchkin in the world.  He was biting down pretty hard on the spoon while eating, though, so I knew something was up.

Finally when he was in the tub and doing his nightly routine of babbling/squealing/laughing I got a look.  Yep, tooth #2 is on it's way.  Yay. This should make for even more fun while breastfeeding.

I know I'm supposed to end the nursing session when he bites me in order to teach him not to do it, but it doesn't seem to be catching on.  Any other BFing mommas out there have any advice?  I really don't want to quit breastfeeding, but sometimes it really really hurts. 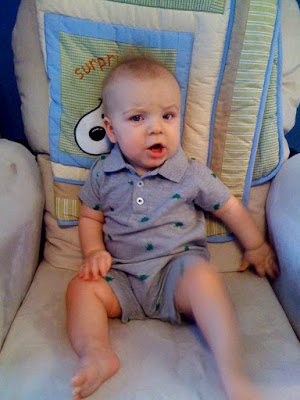 You can just barely see the white spot that is the first tooth that came in - it's pretty far in.  The new tooth is the bottom one right next to it.
Posted by kjw at 9:34 AM