Weekends are just too darn short

I swear - the weeks seem to drag on, but as soon as the weekend hits time speeds up, and before I know it, it's Monday again.  Sigh.

Friday evening my friend, Karen, came over to stay with the munchkin while J and I went out to dinner for my belated birthday celebration.  We went to our favorite restaurant (The Boathouse) and had a great meal and some good wine.  While we were eating the topic of baby #2 came up (as in, will there be one?). J said he would really like to have a little girl and I told him there is no guarantee of that happening.  So no decision has been made either way.

When we got home I was thrilled to hear that Andrew had been a good baby and went down without a fight.  He did get me up at midnight to eat, but that's ok.

Saturday was a relatively lazy day around the house.  Andrew did some napping, I did some cleaning and J did some running (he signed up for the Charleston half marathon in January).  I of course watched football and will admit that I teared up at the pregame activities that they showed. I was proud of my school for showing everyone that we have class and for drawing the attention back to where it really belongs - on the children who were victims in this horrible tragedy.  Unfortunately we lost, but at least it was a step in the direction of returning to normal (or at least the new normal).

That afternoon I also worked on sitting with the munchkin: 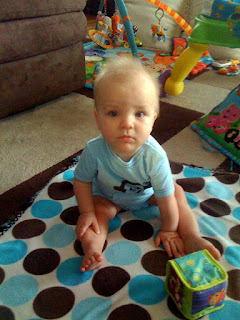 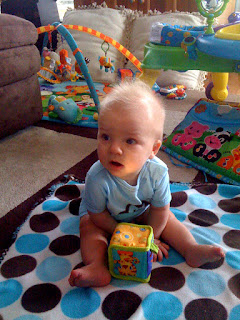 He is getting a LOT better. He no longer slumps right over and will actually sit there with his back straight for 15 - 20 seconds before starting to lean.  I'm glad we're making progress.
Yesterday I was messing around and put him in the Halloween costume that our friend, Jay, gave to us. It was his son's first Halloween costume and it was a 0-3 month size so obviously it was way too small. But it did make for some funny pictures: 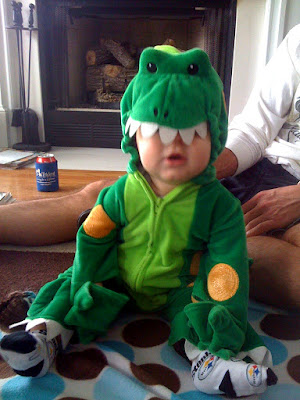 I also had to get him in the mood for the big Steelers/Bengals game. What better way than to give him a smiley cookie? 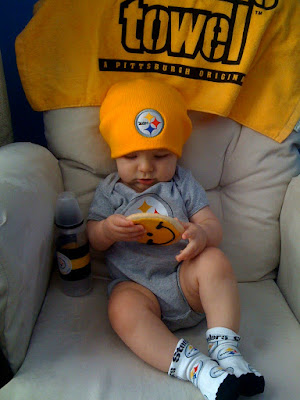 It was a little stale, so it made a great teething biscuit. 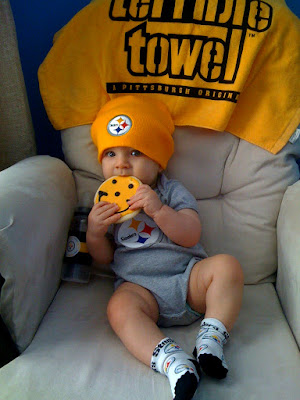 I had to pry it out of his hands before he made a complete mess.

We also had a new development this weekend in that he is now growling. It's hilarious. I guess he has figured out how to make the sound and now he does it all the time. I've been trying to get it on camera, but he always gets distracted when I get it out and he stops. My mission this week is to capture it on film.

So all in all it was a pretty relaxing weekend with some good quality time with the munchkin.  I just wish they didn't go so damn fast...
Posted by kjw at 9:18 AM