As I mentioned last week we are having a bit of an eating struggle in our house lately.  I'm determined to get out of the jarred food habit and munchkin is determined to not cooperate.

Well, this weekend we tried something new (and something that we probably should have been doing for a long time now).  I gave him control.

Before we took a little trip to the store I fed him lunch and because I wasn't up for a battle I broke out a jar. I gave him two spoonfuls and then put the spoon in his hand. He was very eager about scooping the food (or at least sticking it in the bowl) and putting it in his mouth. Of course he also investigated with his other hand, but at least he didn't dump it on the floor. 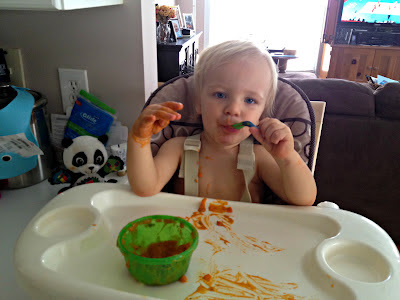 He did a reasonably good job at getting the food in his mouth and he as very pleased with himself.

When we went to Wal-Mart I made sure to pick up some of the bowls with the suction cup on the bottom so we could stick one to his tray and (hopefully) keep him from slinging it on the floor.  Dinner that night consisted of a jar of spaghetti and meat sauce with some macaroni noodles added in.  He was decidedly less neat with this eating endeavor. 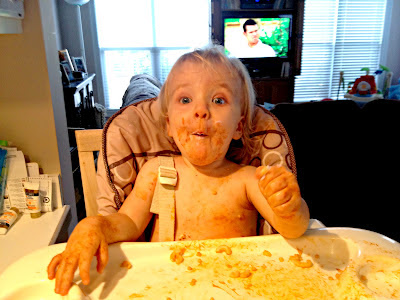 He did do some eating so I am counting it as a success.  I'm thinking we will need to ditch the cushion on his high chair once and for all, though. If not I will be washing it daily.

Of course HE will need to partake in one of his favorite activities after mealtime: 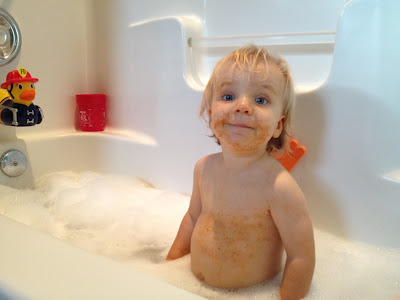 He's not the neatest eater in the world, but the important thing is that he was eating and he was interested in the food.

Tonight I have some veggies to steam for him and I picked up some sweet potatoes since he loves those.  I know it's going to be a looooong process, but I'll take the baby steps forward as a win for now.