Not One of Those Mondays

Today is not one of those Mondays.

We had such a fabulous weekend and it made me feel like we really did hit the lottery with the munchkin.  All weekend I kept thinking to myself "He is such a great kid!". And I even told him that quite a few times.

Saturday morning I popped him in the bike seat and took a nice 30 minute ride with my friend, Emily, around Old Village.  We got back and played for a little bit and then got out the jogging stroller for a little walk over to the park.  After some swinging he took his new favorite park toy and did laps for 15 minutes. 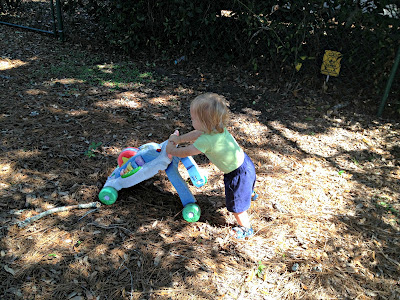 He loves this thing!

As soon as I got him in the stroller to head home I got a text from J seeing if I wanted to go to the beach (he had just gotten home from his 70 mile bike ride).  I told him sure, but I didn't know how long Andrew would last since he'd been up for 3 hours  and had just gotten a lot of exercise.  We headed out anyway to meet up with some friends.  Andrew took a little power nap in his float out in the water with us taking turns keeping him from floating away.  I really thought he would have a complete meltdown at some point, but after a little lunch he was happy as a clam. 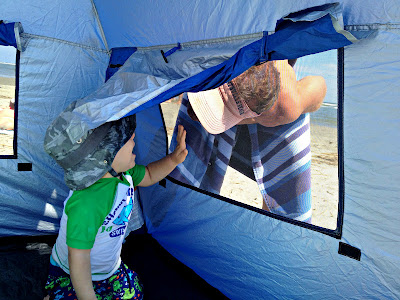 Playing peek-a-boo with daddy through the tent windows

We were at the beach for 4 hours before we decided to pack it in and get home so he could take a real nap.  While he laid down we got ready and then once he woke up we headed to Wild Wings for dinner.  We didn't get there until 7:00 so I again expected a meltdown.  Instead he happily played with the crayons and "colored" while he snacked. 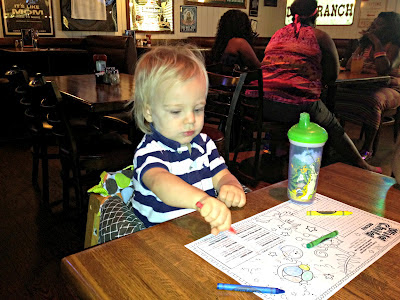 An artist at work

We also ordered him his own meal for the first time ever and I was pleasantly surprised that he actually ate some of it (chicken nuggets).  He busied himself scooping ice out of and back into J's water glass until it was time to go.  The whole time there I just kept thinking about what a great kid he is.

Oh - and we hung his masterpiece on the fridge. 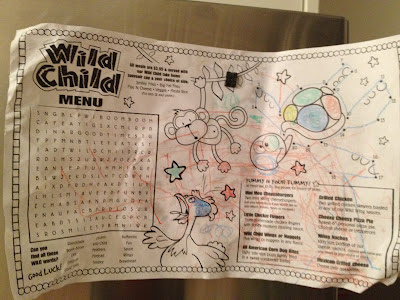 Obviously the actual colored in parts were from me helping. He's more of an abstract artist  ;)


Yesterday he slept until 9:00 (since he didn't get to bed until almost 10:00 on Saturday) and we got up and made him some pancakes with peanut butter mixed right in the batter - he loved them!  J wanted to give the dogs a bath, so we headed out to hang out in the back yard for a bit. 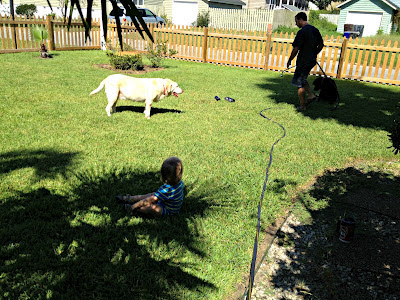 I brought his walking toy outside, but it wouldn't go in the grass so I took him over to the driveway.  He took off!  Luckily we live in a quiet neighborhood with not much traffic so we could walk up and down the street. I followed along behind him with my coffee and we had a nice stroll all around the neighborhood.  By the time we were done he was all flushed and had worked up a sweat. I was a little concerned that he would overheat so we hung out inside for 15 minutes while he drank some water and cooled down before we decided to hop on the bikes for a little ride around town.  This time J had him on his bike and we headed to the park by Shem Creek before we decided we would go to the waterfront park so he could go to the playground.  I love that park because it's all new and it's in the shadow of the bridge so it's nice and shady.  We did the swings for a bit and then he got in the little twirly bucket thing. 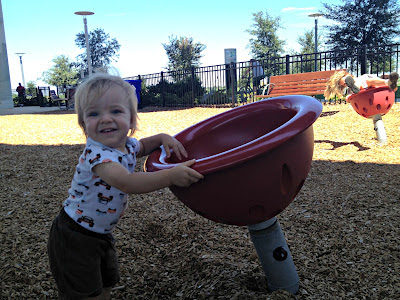 He liked it for about 30 seconds and then he wanted out. He did enjoy watching that girl in the one at the right in the picture. She was spinning around super fast and I was convinced she was going to get out and puke when she was done, but luckily she didn't.

We got home just in time for him to take a 2 hour nap before we had some more playtime.  He's starting to get a little better with the walking and was practicing his skills after dinner in the kitchen.


He looks like a funny little drunk trying to keep his balance - I crack up every time.

After his bath and more playing it was time to get him to bed and to say goodbye to another weekend.  There was no "Thank god he's asleep and we can get some peace and quiet!" or "Thank god someone else gets to handle him tomorrow!".  There was only "Wow, we have an awesome kid and I wish I could hang out with him again all day tomorrow.".

So yeah, it's definitely not one of those Mondays...