My Uterus Just Skipped a Beat

This morning I dropped Andrew off at daycare as usual.  We walked in and there he was - the new baby that started on Friday.  I hadn't gotten a chance to see him yet because he wasn't there yet the other mornings and was already gone when I picked up Andrew yesterday.

His parents must have been early today because there he was, snuggling on Marc's chest on the couch.  I had already seen a picture of him that Andrea had posted, but that picture did nothing to show how little he is.  Gradon (not a fan of the name) is only 6 weeks old so he is still a little peanut.  I looked from him to my seemingly giant 24 pounder that I was carrying and I couldn't help but smile, thinking back to when Andrew was that tiny.  I almost can't believe that he was that small.

Then the baby started to wiggle around and stretched out, letting out one of those cute little baby groans.  And with that sound it happened - my entire body said "I want one".

We've talked a little bit about it and we were both in the 'yeah, we probably will have another' camp.  Well, now I am squarely in the 'we WILL have another' camp.  Seeing the expression on Andrew's face as he sat there and checked him out was priceless.  He was sitting on the couch looking at the baby with the curious look on his face.  I love watching little kids around babies.

So anyway, J and I will need to have a talk soon about our future plans.  At the beginning of the year we said we'd start trying closer to the end of the year. Well, here we are mid-August and the end of the year is rapidly approaching.  I think it might be time to get this show on the road.  I've been charting since AF returned just to get a handle on what my cycles would be doing.  Now I'm getting excited at the prospect of actually using that information for something.

What I'm really excited about is the prospect of having another one of these: 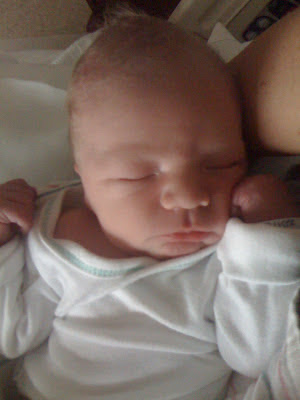