I Was Worried For Nothing

Our daycare is closed for two weeks while they are in Belgium on vacation.  Kind of an inconvenience for us, but they are so amazing with Andrew and we love them so we deal.

For this week my in-laws are in town and my mother-in-law is taking care of the little munchkin.  She is staying with us while my father-in-law is staying at a hotel with my idiot brother-in-law (he's pretty much been banished from our house) and their poodle.  I'm sure that during the day they come over and hang out, but they aren't staying at our house.

Anyway, leading up to this week I have been nervous. I mean, my MIL did take care of Andrew for us before he started in daycare last year, but back then I feel like he was a little easier because he wasn't mobile (and was only 3 months old).  Now he is an almost 18 month old bundle of energy who doesn't stop.  Ever.

I was afraid that he would be too much for her. He loves to be out and about - walking outside, climbing on EVERYTHING and just being a typical crazy toddler.  It made me nervous that she wouldn't be able to keep up.

Well, I walked in the door yesterday at 5:00 to a crazy little munchkin, standing in the middle of the living room cracking himself up and my MIL sitting there beaming.  The very first thing she said was "He was so easy!".

They had spent the  morning playing outside. He loves to walk up and down the driveway and one of his favorite things is to climb up and down the little bump at the end. She said he was in heaven just exploring and playing and that he entertains himself so well.  She finally made him go inside at noon and they had lunch. Afterward he went into his room and laid down on the floor, which I guess was his way of telling her he needed a nap. Which he did for 3 hours (all that playing was hard work!).  They played the rest of the afternoon inside and on the deck.  I couldn't have been happier to see what I did when I got home. It totally set my mind at ease (at lease for a day) and made me happy to know that we really do have a great kid and he really is just fine even when we aren't there.

Now I can only hope that the rest of the week goes just as smoothly. 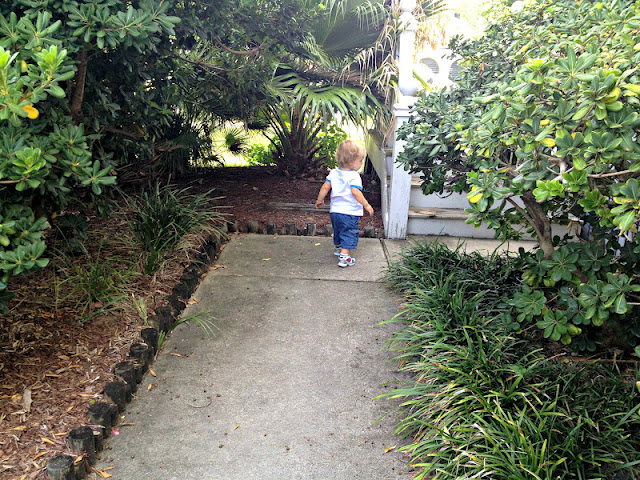 Happy as a clam as long as he can walk around outside  :)