Screw this 9-5 office stuff!  I'm going to become a baker and make cakes for a living.

I did, however, make a cake for Anthony's birthday this past weekend and it wasn't the complete disaster that I was afraid it might be.  You see, I made Andrew's dinosaur birthday cake for his first birthday. Andrea mentioned to Jenny (Anthony's mom) that I could do cakes and said maybe I could do his since she was having trouble finding someone to do what she wanted cheaply (she's a single mom and didn't want to spend big bucks on his cake).  I said "Sure!", thinking she just wanted an Elmo cake and I knew there was an Elmo pan out there, kind of like the dinosaur pan I used for Andrew.

Ummm, no.  She didn't just want an Elmo head. She wanted a two-tier two flavor cake with cream cheese icing and an Elmo on top. Oy.

After several emails back and forth  a decision was made on what she wanted. Thankfully she said she would just put a stuffed Elmo on top, so that helped.  I went out and bought all the cake pans and supplies I would need figuring it's worth the investment since I will be making cakes for Andrew for years to come (I can't believe we didn't have a single cake pan in our whole house!).  Friday evening I baked the cakes so they would be ready for the next morning.  There were two 9" rounds for the bottom and two 6" rounds for the top (chocolate and white).  I also mixed up the icing Friday night so it would be all set. No canned stuff for this lady!

Thankfully the party wasn't until 3:00 Saturday afternoon so I had plenty of time.  While J kept the munchkin entertained I went to work with my mad decorating skills.  Six years working at Baskin Robbins through high school and college finally paid off  :)

The cream cheese icing kind of sucked for decorating since it's kind of gooey, but I was able to get the cake frosted without too much trouble.  Luckily I wasn't using that stuff for the border or anything because there is no way that would have worked.  Instead I used some fondant for the star cutouts and the little balls for the border.  It looks like playdough and kind of has the same consistency, but at least it's edible.  It didn't come out exactly like I had pictured in my head, but I think it ended up alright: 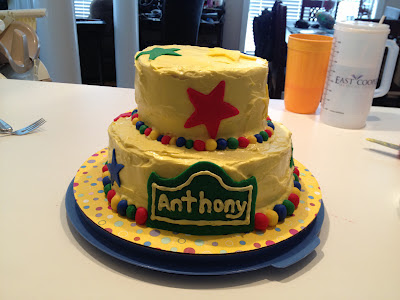 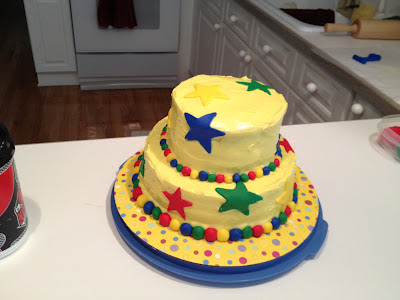 Of course we had to transport it to the party over at Waterfront Park (about 4 miles from our house) and I didn't have a box or anything to put it in.  I held it in my lap with strict instructions to J to not slam on the breaks or make any sharp turns.

We made it there unscathed and Jenny topped the cake off with the Elmo toy and my fondant "1" for the final decoration. 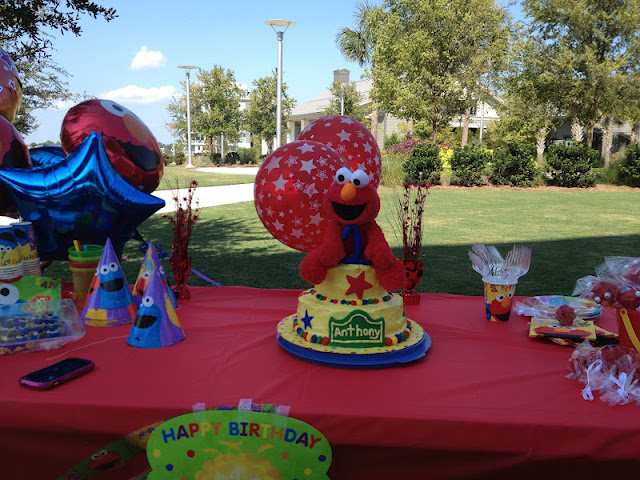 Everyone loved it and most of it got eaten.

Oh, and Andrew had a good time at the party being mildly inappropriate with Anthony's  toy: 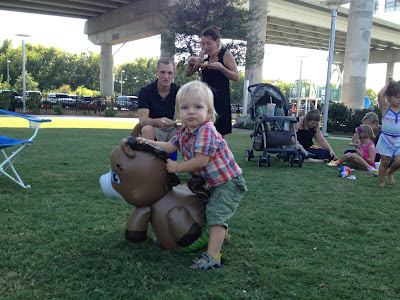 All in all it was a success.  Unfortunately it won't exactly pay the bills so I am back at work today.  Oh well...