Who's an Awesome Wife?

For getting these for J for his birthday: 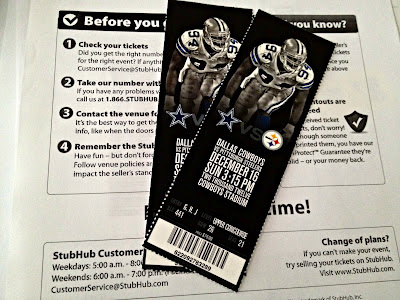 He's a die-hard Cowboys fan.  I'm a die-hard Steelers fan.  As luck would have it they are playing each other in Dallas the day before his 41st birthday.  When he mentioned that I started checking on plane tickets and found some relatively cheap ones out of Myrtle Beach. I checked with my mom to see if my parents will be in town that weekend and up for some babysitting and she was all for some extra munchkin time.

We booked the flight and hotel combo and then I had to find some game tickets. I was hoping with the Cowboys losing to Seattle last weekend that ticket prices might go down a little, but it didn't seem to have much effect.  After a lot of searching I found some good tickets for $200 a pop and pounced on them.  They arrived yesterday with no problem (even though he almost threw out the FedEx envelope with them in there because he thought I'd taken them out).

J knows about the game and the trip so it's obviously not a surprise.  He knows that this is pretty much his birthday and Christmas present rolled into one (I'll get him some little stuff, but a $1200 football weekend kind of wipes out my gift budget).  I'm excited about the trip although a little part of me will be sad because it will be our first trip without the munchkin. I know we'll have a good time - I just don't know how it'll be going over 48 hours without getting to see him.

Oh, and even though it's his birthday trip I will still be rooting for my Steelers. I figure his gift will be getting to go to Dallas Stadium - he doesn't need a win, too  :)