Hmmm. That can't be good.

This whole baby thing is just full of surprises.  Some good (catching his first smile, watching him roll over, hearing that first giggle, etc).  Some not so good (Seriously - how much hair is going to fall out?  Am I going bald??).  Some other stuff is just downright bizarre and a little shocking.

I was all amped because the manual pump I ordered had arrived and I wanted to try it out.  (I bought a Medela Harmony in the hopes that it would be awesome and I could use that one at home for the evening and morning pumping during the week and not have to lug my Ameda back and forth to the office every day. So far I'm not impressed, but that's a story for another day.)  Anyway, I was like a kid on Christmas with a new toy and I couldn't wait to try it out.

I popped it all together, inserted righty and started to pump.  Instead of looking down to see milk beginning to flow I got a complete shock and saw blood flowing instead.

I must have gasped out loud because J asked what was wrong (he was sitting behind me on the computer).  I showed him the blood that had dropped into the bottle instead of milk.  "Is that blood?"  I wanted to say "No, my boobs just magically started dispensing bloody mary's"  but instead I went running to the kitchen to wash everything out and then to the bathroom to start inspecting righty.

I doesn't appear to be a cracked nipple or anything. And I don't think I have mastitis - no fever, no unbearable pain, no redness.  To test it out I hand squeezed some milk out and everything began to come out clear - or more accurately - milky white.

I of course consulted Dr. Google and it seems like it could be one of the following:
So far it's only happened in righty and as of this morning there was no blood when I pumped.  It's slightly sore right now, but nothing too noticeable.  From everything I have read a little blood in the milk won't do the munchkin any harm so I'm not too worried. If I start seeing blood in his diaper from it passing through his system I am going to freak the hell out, though.

Anyone else out there in baby-land have anything like this happen?  I'd love to hear your feedback  :)

And just because he's cute, here is a picture of the munchkin in his new hat that I bought him yesterday. I don't think his peach fuzz is gonna keep that noggin warm this winter so he needed some cute headwear. 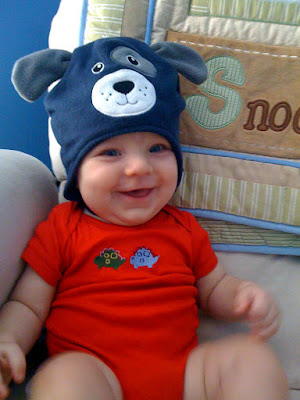