You're letting me down

This is what I am saying to my pump on a regular basis now.

I'm starting to stress out that I am not getting enough anymore when I pump.  Andrew is a hungry little bugger and I'm struggling to keep up.  I'm extremely upset that he won't eat the milk that I froze when I was on maternity leave.  I still have probably 70 ounces in the freezer, but I haven't even tried any with him lately.  I don't want to thaw it just to throw it out.

And now I just feel like my pump is not working as well.  I can still feel milk in the boob, and I can hand express more when I am done pumping, so I know there is more in there.  It's just not coming out with the pump.

I'm thinking my trusty Ameda needs a thorough cleaning and I probably need to get the replacement parts kit since some of it might be wearing out from the extended use.  I think there is an air leak on the one side and it's causing my output to go down.  I see a trip to BRU in my very near future.

To help with production I'm drinking 'Mother's Milk' tea like it's going out of style and popping fenugreek like tic tacs (I'm following the instructions on the bottle - no ODing on it!).  I feel like I drink plenty of fluids, too.  My weight dropped down in the past week and I probably haven't been eating enough, so maybe that's part of it.

Monday is the magical 6 month mark that was my first goal to reach with breastfeeding.  I honestly never in a million years would have thought that I'd enjoy it as much as I have. Sure, it was rough at first. Being a first time mom I had no idea what the heck I was doing. He took a few weeks to get back to birth weight and I was a mess thinking that I was starving my baby.

But now that we are in a rhythm it has been wonderful. I love the closeness of it, especially in the mornings.  The excited yell he lets out when I sit down with him in the glider makes me smile every time.  He is so anxious to get to the boob that he will practically latch on through my shirt.  Then once he gets going he has one hand on either side of it, holding it like a bottle, and he'll give the boob a little pat as if to say "Good job - keep that milk coming!". It cracks me up.

For someone that was apprehensive about breastfeeding before giving birth, this has been a huge turnaround.  I thought that I would at least give it a try, but I never thought I would be so in to it.  I think part of it is the pride I take in knowing that I am able to nourish my baby just with my body. Like it is me and him against the world. (The buttload of money we are saving by not buying formula doesn't hurt either!).  It's also the bonding aspect that I love.  I know you can bond just as much when feeding your baby with a bottle, but when he's nursing and pauses for a second to look up at me and give me a goofy grin before he dives back in for more, my heart just melts.

So here's hoping that we can make it to my new goal of a year.  I know it's possible he'll self wean before then, but I am going to do everything in my power to make sure that my body (and pump) don't fail us before he's ready to quit.  I just hope he doesn't start popping out teeth and gnawing on me when he's eating - but that's a whole other hurdle to get over  :) 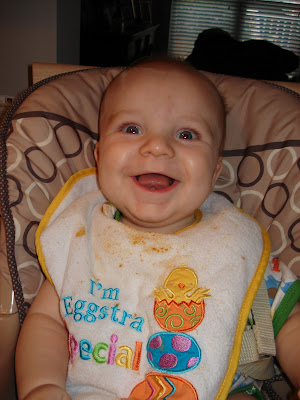