This weekend was busy as usual.  Friday night we had a relaxing night at home. Andrew decided that the walking toy was unnecessary and busied himself with a giant tub of cheese puffs:


After dinner and bathtime he then wanted to play with what seemed like every single toy that he owns. He was none too pleased to have to quit to go to bed, but his protests were short lived since he was really tired.

Saturday we went to a friend's little boy's 5th birthday party. I was unaware that it was going to be outside and that we would be sweating to death, but we made the best of it.  One good thing that came of it was that Andrew actually ate an entire piece of pizza.  Yes, I fed my almost 17 month old pizza and was happy about it.  The fact that he was actually eating something made me not care that it was cheesy greasy deliciousness.  Oh, and after that he downed two (small) pieces of cake - although a good bit of it ended up on his face (and on the ground). 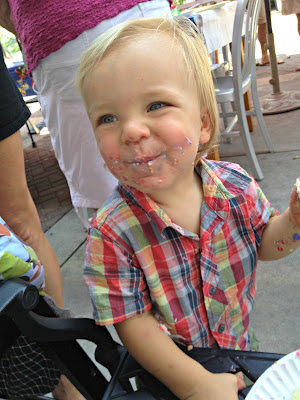 We got home in time for the sugar crash so he could take a nap and we could do some stuff before going out to the movies for a date night (my mom came down for a visit and to babysit so we got a rare night out alone).

Yesterday morning I came downstairs to Andrew happily bouncing on the couch next to my mom.  I was amazed that he wasn't screaming since he hadn't eaten yet, but apparently he saves the yelling for me.  After breakfast he was being a little cranky so J put him in the jumperoo and he bounced in there for about 15 minutes. I am amazed that he 1.) still likes that thing and 2.) hasn't completely destroyed it yet.  He goes CRAZY with the jumping (I have a video somewhere that I need to upload - it's insane).

We decided to hurry up and head over to the park for some swinging and playtime before the rain came in so we all hopped in the golf cart and headed over.  After 5 or so minutes in the swings we put him down with a walking toy that always stays at the park.  He busied himself for the next 20 minutes doing this:


He was in heaven just doing laps around the park - it was hilarious. He was so good about making the turns and changing directions when there was an obstacle in the way.  By the time he was done his little face was flushed and he had worked up a sweat.  I gave him his sippy and we headed home for lunch and a nap.  All that activity wore him out and he was down for the count for 3 hours.  After naptime he was raring to go again so we took him for a little stroll around the neighborhood in our makeshift beach wagon: He had a blast sitting in there and kicking his feet.  Afterward I divided my time between chasing him and helping J put the new baby seat on his bike. By the time we were done Andrew was filthy and tired so it was off to the tub. He always gets a second (or third or fourth) wind after the bath so he spent 30 minutes playing with all of his toys before we made him go to bed.  I tried rocking him for a few minutes but he kept staring me right in the face and giving me his biggest and cheesiest grin.  I plopped him in the crib with minimal protests. listened to him "talk" to his cow and duck for a few minutes before rolling over and sacking out.  It's crazy how much energy he has. If he is awake he is moving.  I can only imagine what will happen once he (finally) starts walking unassisted. It's going to be a track meet around our house, I can just see it...