I feel like I'm saying this to Andrew on a daily basis.  It's not that he doesn't eat anything at all, but he doesn't  eat a variety of foods and he would still eat jars of food happily for every meal if I would give them to him.

What am I doing wrong?

He's 16 months old and still not eating tons of finger foods. Or at least finger foods that are good for him.  He'll eat a hot dog in a minute flat (ok, maybe that's an exaggeration), pops chicken nuggets in his mouth with no problems, shovels in mac n cheese like it's going out of style, and can't get enough of the mini pancakes with peanut butter on them.

Pretty much anything else we put in front of him gets either A.) Mashed into the tray with his little thumbs  B.) Squeezed in his little fists until it is pulp or C.) Picked up and tossed on the floor.  Where it doesn't go is in his mouth. I don't get it - he puts everything in his mouth.  Everything.  Except for food.

This has caused a number of meltdowns on my part, the worst of which was Tuesday evening when I ended up in tears. I'll blame part of that on hormones, though (damn you, CD1!).  I told J that I feel like I'm failing because I can't get him to eat.  He insists that Andrew won't starve himself and he will eat when he's hungry. I fear that he isn't getting the nutrients he needs. 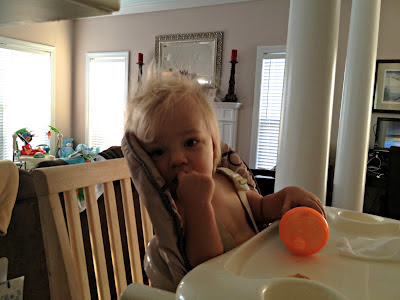 I've done plenty of reading online and have googled everything I can think of to find ideas how I can get him to eat.  I have a feeling this weekend is going to be full of me trying to get him to eat something and him throwing it on the floor.  I'm hoping that I'm wrong and he will surprise me by chowing down on something, but I need to prepare myself for the fact that it probably won't happen that way.