We did it!  We made it through one whole year with no major catastrophes, no trips to the ER, and without J and I killing each other.  It's crazy how fast the year went and how much he's changed: 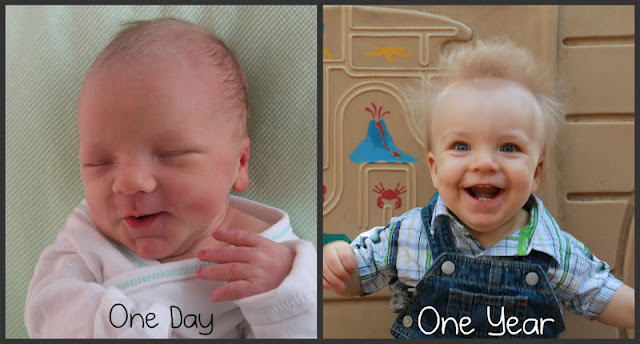 Unfortunately I don't have any cute pictures of him destroying his big cupcake I got him yesterday (he'll get his real cake at his party this weekend) because after his shots at his doctor appointment he was a miserable little munchkin all evening so we had to forgo the cake and presents. We'll do that tonight. I don't think he'll mind.

Oh, but that was a huge mommy fail on my part - making him go to the doctor and get shots on his birthday. What was I thinking??

Anyway, on to the fun stuff...

Stats:  Per his measurements yesterday he is:

So he chubbed up a little bit since his 9 month appt and went from the 27th percentile in weight to the 46th.


Size (diapers, clothes, etc.):  Not much of a change from last month. Still in size 3 diapers with no leaking. Mostly in 12 month onesies and bodysuits, but there are still 9 month ones that fit.  Pretty much in all 12 month pants and shorts.  I had him in a 18 month bodysuit yesterday for his birthday (they were out of 12 month ones) and it was gigantic, so he's definitely not ready for those.

Sleeping:  He sleeps 10+ hours at night (sometimes up to 12 on the weekends) with two naps - around 9:00 and 1:00.  I have zero complaints when it comes to his sleeping - we have been very blessed.

Eating: I BF in the morning and sometimes in the evening (if he wants it).  We started the transition to whole cow milk this weekend and so far he isn't sold on it.  I really want to get him transitioned over because I am about tapped out and I really don't want to have to go buy more formula.  I've started taking 4 oz bottles of BM to daycare along with a bottle of whole milk for them to add 1-2 ounces to the BM bottles.  We've been trying to get him to drink the milk out of a sippy, but so far he isn't having it. He is a champ at drinking water out of a sippy, but so far he is resisting milk/formula in it. As far as eating, we still do a lot of the stage 3 foods.  He will not eat the pasta balls in any of them, but he eats the vegetable chunks.  Depending on his mood he will eat chunks of chicken or pork, broccoli florets, cauliflower, steamed carrots, penne pasta and elbow macaronis (swallows them whole).  Oh, and he loves black beans. I mean he loves them.  Like double fisting them into his mouth loves them.

Milestones:  One more tooth on the bottom (7 total) and another one about to poke through). He's now started pointing which is hilarious.  No walking or cruising yet, but with as much as he gets into by just crawling I'm not worried.

New adventures:  We did the Walk For Water this past weekend and went out to Sullivan's Island for the St Patty's Day block party last weekend.  Nothing overly exciting.

Favorite toys and activities:  He loves to roll balls around the floor and chase after them, pulling the tupperware out of the cabinet and banging them on the floor, and his new favorite - the toilet: 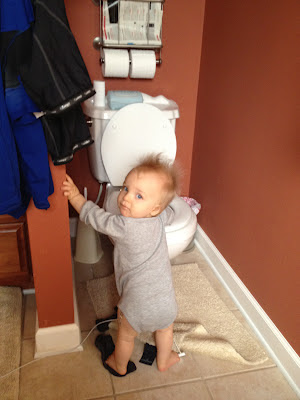 Yes, we need to keep the lids down from now on

Funny happenings:  Honestly, every day with Andrew is hilarious.  The other night after his bath he crawled out into the living room. I was standing by the chaise and leaned over to look at him. He pulled himself up, looked me straight in the face and began laughing hysterically. I wasn't even touching him but he thought something was hilarious.  I couldn't stop laughing at him, which only made him laugh harder. I had tears in my eyes from laughing so hard. He's a funny kid.

What I'm looking forward to:  His birthday party this weekend (please let the weather hold out!) and this summer at the beach with him. He'll be able to play instead of just laying in the tent, so it should be interesting. I see lots of sand eating in our future.