As I mentioned previously here we have had a bit of a rough go of it with the eating solid foods.  When we first started any kind of finger foods (besides melting puffs) we dealt with a lot (a LOT) of throwing up.  I became accustomed to cleaning up a pukey mess at the end of many mealtimes.  It was frustrating. And gross.

Now it seems that we have turned a corner.  Last Sunday night we cooked a pork tenderloin.  Andrew had already eaten his dinner, but when we sat down to eat I tossed a few little chunks of pork on his tray, fully expecting them to be on the floor in a matter of seconds.  I was (very) pleasantly surprised when he picked one up and popped it in his mouth.  I was even more surprised when he chewed on it for a minute and swallowed it.  No gagging. No puke.  Hallelujah!

He continued eating and devoured 6 of 8 chunks that night (the last two got chewed up and spit out like pieces of bubble gum).  The next night we made some chicken and I gave him a couple chunks of that.  More success!   Throughout the week I gave him pork chunks with dinner (and lunch when I was home).  He loved it.  This weekend I cooked some elbow macaronis and mixed them in with the mac 'n' cheese puree baby food.  He didn't chew any of them, but he swallowed probably two dozen of them whole.  Still no gagging.  I wanted to literally jump up and do a happy dance.

We still have a couple of the purees in the pantry, but I don't think I am going to have to buy many more of them.  I'll still buy the stage 3 chunky foods to take to daycare, but I am so happy that I can finally start also sending some real finger foods for him to eat. 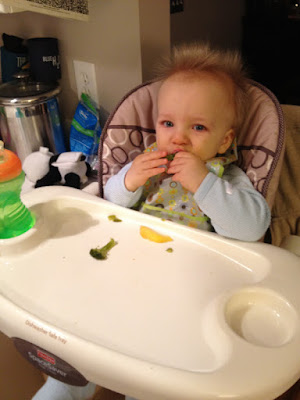 This was some broccoli and peach slices 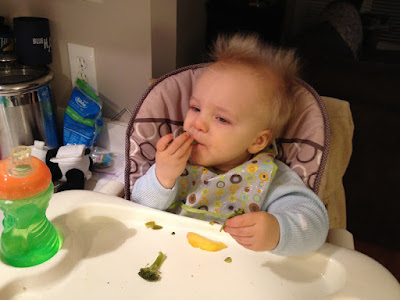 So it took a while, but we finally have a baby who will eat some real food - and not just cheerios.
Posted by kjw at 9:34 AM