We Almost Made It

That is, we almost made it all the way through Andrew's first year without any real sickness and extra trips to the doctor.

Our streak ended on Tuesday when Andrea called me at 11:30 to let me know that Andrew had a temperature of 103 degrees.  I packed up my laptop and hightailed it to their house to get my sad little munchkin.  When I got to their house he was lounging in the bouncy seat whimpering.  He was hot to the touch and they had taken his pants off and pulled his shirt up to try to cool him some.

I got him home and he didn't seem too bad.  He ate his lunch and went down for a nap. While he slept I was able to get work done (I had emailed my boss to let him know I had to pick up my sick baby and would be working from home for the afternoon).  I texted my pediatrician sister to ask her how high of a temperature would be a concern. She said 103 was concerning, but as long as he wasn't having respiratory distress, was wetting at least one diaper every 8 hours, and wasn't pulling at his ears or refusing to drink we shouldn't need to take him in. She advised me to keep him hydrated and gave me the dosages of Tylenol and Motrin that I could give him and said if the fever didn't respond that I should call the doctor in the morning. 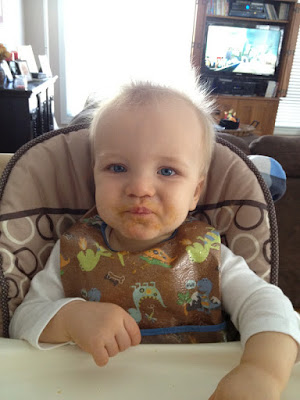 He ate lunch after coming home from daycare, so I had high hopes


Later when he got up he did nurse a bit, but he didn't want to eat any dinner. 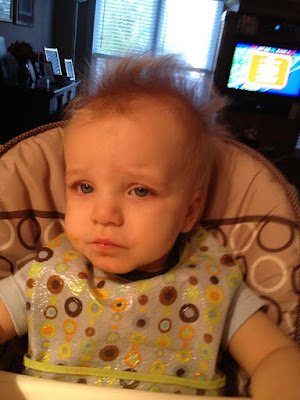 We gave him a tepid bath to try to lower his temperature, but it was still 102.6.  He had some more Tylenol and his bedtime bottle - half of which he threw up all over both of us.  We got him cleaned up and changed and in the crib. I anticipated a rough night so I went to bed early.

He actually slept through the night, but when I went in to check him in the morning he had thrown up in the crib, all down the bumper and on to the floor.  I felt so bad for him.  I got him changed and cleaned up then tried to nurse him. He just laid on my lap and whimpered, showing no interest in nursing.  His temp was still 102.3 and he just looked so sad.  I am used to my little spazz, so to see him so lethargic and quiet was very upsetting. 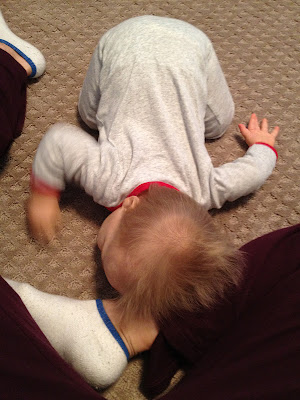 I called the doctor's office to see what they thought. They wanted me to bring him in so I made the appointment and emailed my boss to let him know that I still had a pretty sick baby and would not be able to dial in to the conference call at 9:00.

We got to the doctor and the nurses commented on his ever crazy hair.  He was snuggled up to me looking sad.  The nurse weighed him (21 lbs and change) and took his temp. It was down to 98.8 so the Tylenol seemed to have had an effect.  His pulse ox was fine, so that was good.  Dr. Kirlis came in to check him out. Ears looked great, lungs sounded good, bowel sounds were good (he hadn't pooped in 24 hours which is VERY unusual for him), but his throat was really red.  She wanted him to be tested for strep, so the nurse came in to do the swab. Andrew was not happy: 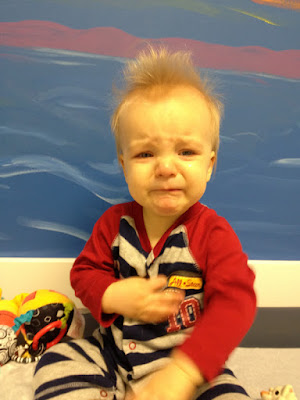 This face made ME want to cry


Thankfully it was negative.  She suspected a virus and said pretty much what my sister had told me. I apologized for overreacting and she assured me that it was good that I brought him in. She said if his fever persisted for 48 more hours or if we became concerned to bring him back.  He was in pretty good spirits when we left so I stopped by BiLo to get him some pedialyte.  He ate a late breakfast when we got home and went down for a nap at noon. 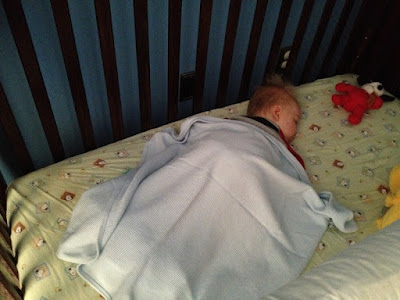 I was hoping he wouldn't smack his head on the sides - his bumpers were in the wash after the overnight pukefest.

After four hours he woke up.  He had a slightly wet diaper and his temperature was back up to 102 (under arm this time).  My poor little guy was miserable. He wouldn't nurse. He snuggled up to me on the recliner, letting out little whimpers and then passing back out.  I had tears in my eyes because he was so sad. 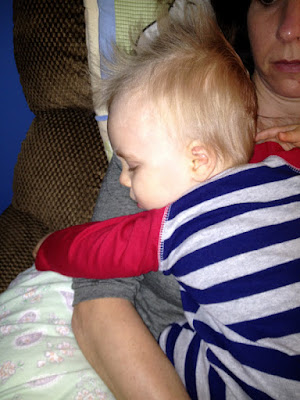 J got home and cuddled him for a while. We got him to drink a 5.5 oz bottle so I felt a little better that he at least was getting some fluids.  I gave him some Motrin to help with the fever and about 10 mins later he threw up that and a good bit of the bottle we had gotten in him.

We put him in his new duck tub to try to help with the fever (and get him cleaned up): 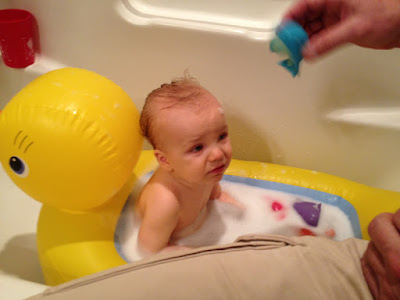 Even the quacking duck tub didn't make him smile

I was doing everything in my power to get him to drink some pedialyte or water. He wouldn't drink from a bottle, a sippy cup, a regular cup, or let me put some in his mouth from a straw.  He did eat some cheerios, but he wouldn't drink.  Fortunately while he was sitting in his high chair I saw his poop face: 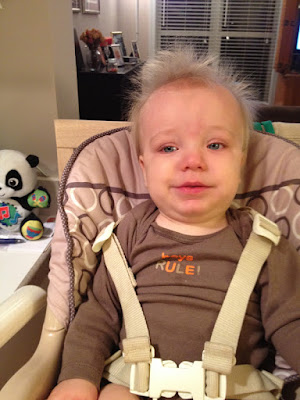 Which meant he finally had a poo.  34 hours from his last one - so not the norm for my little munchkin.

We gave up on pedialyte and I got him ready for bed.  Thankfully I was able to get him to nurse for 10 minutes so I felt a little better about that.  He was in the crib at 9:00 and when we went to bed an hour later I could hear him in his room moaning.  I went to check on him and he was still in the position I had laid him in. At 3:00 he was sitting up in his crib crying. I went down to check him and was ecstatic to find that his temp was down to 99.  I gave him some Tylenol and he nursed for a little bit before I rocked him for a while. He was back in the crib at 3:30 and when he woke up at 7:30 I smiled when I checked his temp and it was 97.7 (his normal).

Today he has been pretty much back to his smiley self and getting into all of the stuff he was too sick to get into yesterday.  I don't mind chasing him around the house, though. I'll take my little troublemaker over the sad sick baby any day of the week! 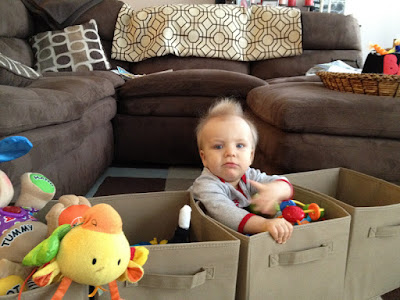 So happy to have my little munchkin back!