I normally don't work from home. I have an office that I go to Monday through Friday most weeks.  But when special circumstances come up where I am unable to go into the office I am lucky enough to work for a company that allows us to work from home.  My boss doesn't really care where we work from as long as we are getting our work complete.  My job also tends to be feast or famine, too, so if there is nothing going on or if I am waiting for people to get back to me with things I sometimes have a lot of down time.

Anyway, one of those special circumstances happened this past week.. Andrea (one of our daycare providers) had a death in the family and they needed to drive up to PA for the funeral.  Because of that they closed at noon on Tuesday and would be closed Wednesday and Thursday, opening back up on Friday (today).  I worked from home Tuesday morning (no point wasting 40 minutes of time I could spend working with driving back and forth from my office) and picked him up at noon.  He had just finished lunch and went down for a 2 hour nap when we got home so I was able to get lots of work done.

Wednesday I had a work at home day with the munchkin. I was a little concerned that I wouldn't get anything done - this happens to be one of those "feast" times when I actually have a lot that I'm working on.  I was especially nervous about the conference call that I had at 9:00. I mean, could I really expect an 11 month old to be quiet so mommy could hear her call?  As it turns out I had nothing to worry about - we had a fantastic day and this is what it was like to work at home with him for the day.

After breakfast he busied himself destroying playing in the kitchen.  Those rugs never stand a chance with him around.  Those towels were all pulled from his favorite drawer. 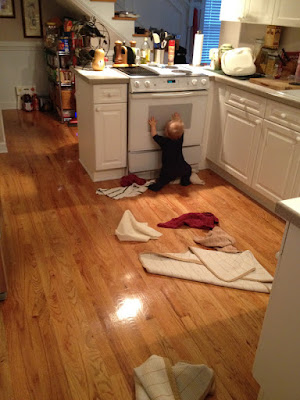 After he was done in the kitchen he disappeared down the hall. I found him chewing on the stuffed moose's antler - attempting to look innocent. 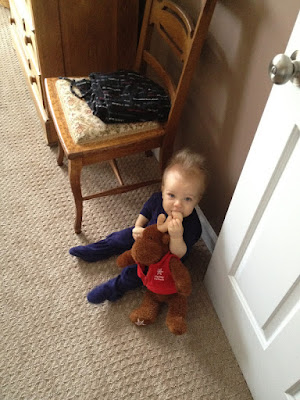 At 8:45 I nursed him a bit and plopped him in the crib at 8:58 for his first nap, leaving me two minutes to dial into my call.  I was actually the first one on the line (yay  me!).  He "talked" in the crib for a while but passed out before my call was over.  He stayed in the crib until he woke up at 11:00.

He sat under my chair and behind me for a while playing with my computer cord (yeah, I really need to break that little habit). 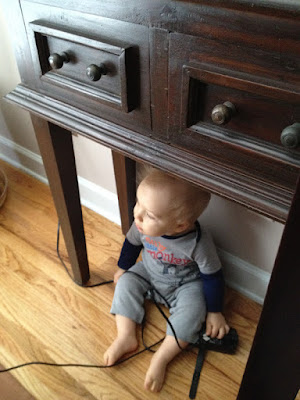 Then he discovered the plant in the corner and decided to try to yank the little vine out that J has growing in there. I was able to rescue it before he got too far. 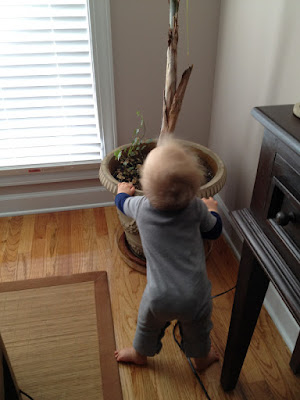 I set him back down with some toys, which he swiftly scattered all over the place. He spent a good 20 mins banging them on the floor and against the wall, all the while yelling at them and "singing".  I was cracking up as I listened to him. 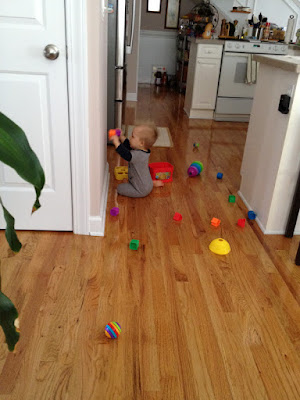 Once he got bored with that I decided to try to corral him in the living room.  I set him in the middle of my homemade play pen (made out of the ottoman, couch and his toy bins) and let him go to town. 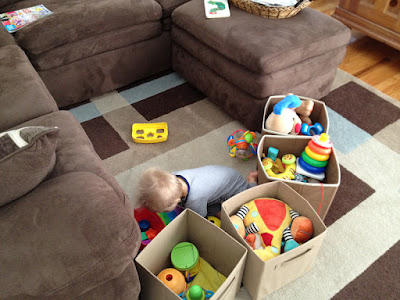 He was in there for a while flinging toys everywhere (you'll notice the ring stacker toy in the 2nd bin from the right above is now tossed outside the play area with the rings scattered).  Then I heard some paper rustling.  Oops!  Apparently he found the newspaper that was on the far side of the ottoman and went to work with it. 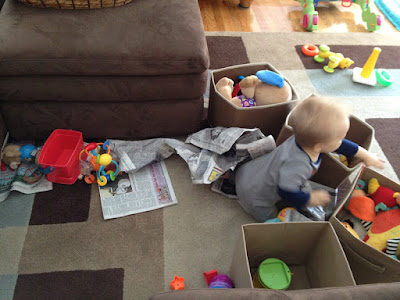 After scrubbing the newsprint off his hands we had some lunch.  He ate his mac n cheese and some pieces of pork tenderloin then stood next to my chair eyeing up my greek yogurt.  I gave him a few bites - and discovered later that he had wiped his yogurty face all over the side of my pants. Excellent. 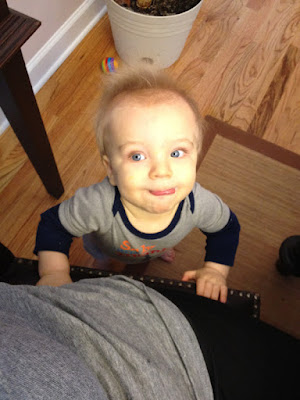 After lunch and a few more hours of playing he went down for another nap around 2:30. He talked and played in the crib for a while and then slept for 90 mins.  At 4:30 I decided I was done with work for the day and we took a little stroll over to the playground so he could swing.  He took a few turns on the slide and we headed home. 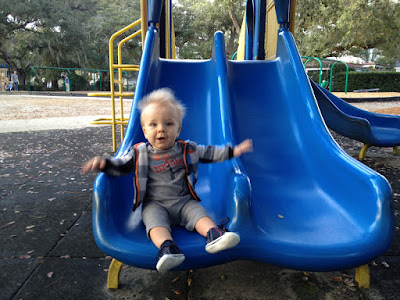 All in all it was a great day at home with my munchkin.  J got to spend the day with him yesterday (he just took the day off, he wasn't working) so they had their first full day of just the two of them.  He was equally as good for  him and they had a great day together, too.  How did we get so lucky with such a fantastic baby?
Posted by kjw at 12:12 PM