Thus far we have been lucky as far as Andrew being well adjusted and not having any issues being dropped off at daycare every morning.  Well, I think our luck is running out.

On Tuesday as I was walking out the door he came crawling after me.  I shut the door so he couldn't get out on the porch and when I turned around after walking down the steps he was up against the glass, wailing.  My heart about broke in half and I wanted to cry.  At the first stoplight on the way to work I sent Andrea a text saying how that broke my heart and he normally doesn't notice me leave.   A few minutes later she sent me a video of him "dancing" in the playroom to some music.  She said he was fine after she picked him up and not to worry - all kids go through it.  I know that's true, but I was hoping my kid would be different.

Yesterday there were other kids there when I dropped him off so he was more distracted. I was able to sneak out while he was playing and he didn't chase after me.

This morning I was the first one there.  He crawled around all over the place while I got out all his food and chatted with Marc.  He crawled around babbling, I picked him up to get my last hugs and kisses in and then set him down in the direction of Marc, hoping he would crawl over to him and be distracted. No such luck.  I looked back after I walked out and there he was, on the other side of the glass, face all crumpled up and ready to cry.

In my heart I know that he loves it there. I know that he doesn't sit there all day, inconsolably crying because I'm not there. I mean, I've witnessed him having a grand old time playing with toys and watching the other kids - happy as a clam until he sees me and comes excitedly crawling towards me, laughing and yelling.  So I know that he is fine and that it is good for him to have other kids to play with and learn from.

But then there are moments like this morning where I feel such immense guilt at walking away from him.  When seeing that crumpled up face makes me want to cry.  When I wish I was the one he was spending all day with.

So it is beginning. The separation anxiety for him and even more mommy guilt for me.  Sigh. 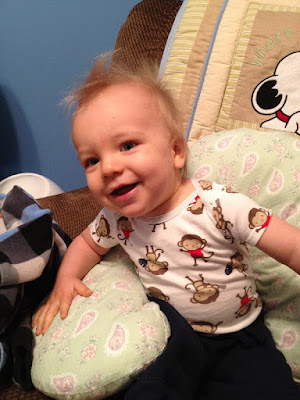 I prefer this smiley face instead of the sad baby...