Yes folks, it's that time of year again. Time for March Madness to kick off. (Ok yeah, technically the games started on Tuesday with the "First Four", but the real tourney starts today).

My mom's office does a bracket pool and last year we decided to try to get a little more high tech and enter them in online so everyone could actually see how they are doing against everyone else during the tournament.  Well, for a bunch of lawyers they aren't really computer savvy so I started the group and actually entered all the brackets in.

I remember doing this because I was working from home last year that day since I had a doctor's appt that afternoon.  I was big and pregnant and trying to sit comfortably at our dining room table while doing some work (umm, yeah - I had the attention span of a flea at that point so I was mostly working on brackets  :)  )

I think for the rest of my life I will have a great association with March Madness because Andrew ended up being born in the thick of it.  He wasn't due until April 10th so he would have missed it, but he decided to show up two weeks early instead.

It's funny because I went back and looked at my facebook posts and the last one I made before announcing Andrew's arrival was of me bitching about Marquette sucking in their game that Friday night.  I never knew that when I went to bed that night after watching the games I would be waking up just two hours later to contractions and my water breaking.  I guess Andrew wanted to add to the madness  :)

Spring has always been my favorite season - the weather is getting nicer, it's not hot and muggy like it will be in a few months, the flowers are blooming, there are spring thunderstorms, and we get the extra daylight in the evenings.  Add in some basketball craziness and my little munchkin being born and it makes March my favorite time of year. 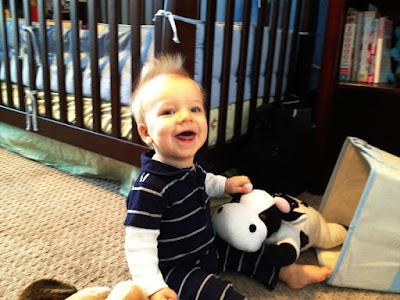 Andrew is ready for the madness to begin, too