Ok, so obviously with the munchkin being sick the last few days (he's much better now) we have been using some thermometers.  I have an ear one that I mostly use on him, but I know that one isn't as accurate. So I also got out the one we got at our baby shower that has rectal, underarm, and oral attachments.

Because I wanted to get the most accurate readings we had used the butt one several times this week.  Yesterday I was sitting in the recliner in Andrew's room while he was playing on the floor.  Earlier I had knocked the thermometer off the little table in there so of course that was what he made a beeline for.  I wasn't looking and he grabbed it and stuck the thing in his mouth.  Yep, he was happily sucking on the probe that earlier that day had been in his butt.

The part that makes it a little less gross is that I HAD cleaned it after using it, but still - that was in your butt dude!

So yeah - mommy fail for letting him get a hold of it.  But I should at least earn points for not pausing to take a picture of it before I took it off of him, right?

Something tells me that won't be the last nasty thing that Andrew decides to put in his mouth... 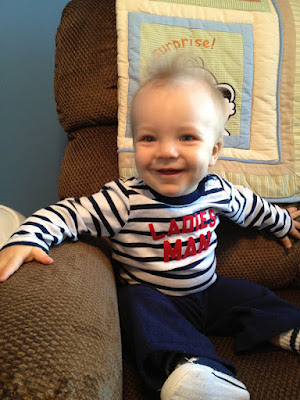