I Think We Have a New Favorite

After having it laying around in one of his toy bins for months and pretty much ignoring it Andrew has finally discovered the Fisher Price Laugh & Learn Love to Play Puppy. 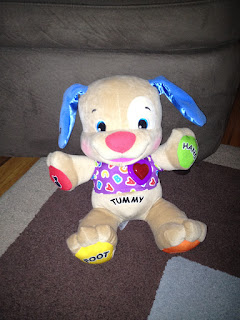 Last night after his bath when he was having a little more playtime out in the living room he dragged it out of the bin.  I don't know if he hit it on purpose, but the little heart on his chest got pushed and the puppy started talking and singing.  And talking some more. And singing the same song again. And again. And again.

I know the puppy says many different things (in a somewhat annoyingly cheerful voice), but since the heart is the only thing that flashes that seems to be the only thing Andrew wants to press.  He sits there with one chubby little finger poking that heart over and over again.  I went to bed last night with that song replaying over and over in my head ("I love you, I love you, morning, noon and night.  I love you, I LOVE you, you make the world so bright") 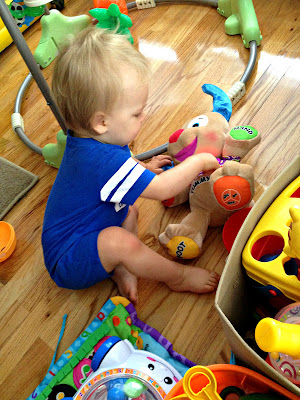 Giving the heart a nice poke

I'm assuming that the munchkin was also dreaming about the puppy because as soon as I plopped him on the floor after breakfast he hauled butt into the living room and dragged out the puppy again.  While I cleaned up breakfast I heard the puppy asking him for hugs and singing his favorite tune.  Something tells me I better get used to hearing that song. 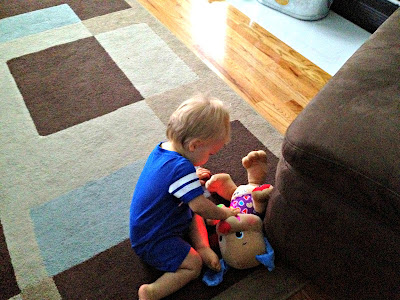 Anyone else have this toy?  Are you ready to toss it out the window yet??