Yes, this is two posts in one day, but it is slooooooooow at work so why not? Plus I wanted to join in on the fun for this week's Toddle Along Tuesday and share our bedtime routine.

Our bedtime routine starts most nights right after dinner.  Once the munchkin has made it clear that he is done with eating (meaning all food has been thrown to the floor) we go and run his bath.  He LOVES "helping" daddy fill the tub: 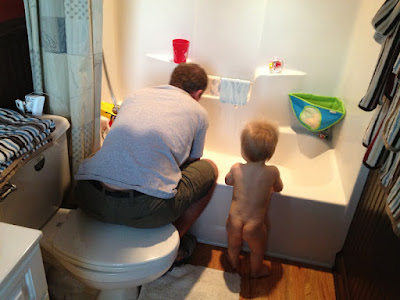 This is normally between 7:15 and 7:30.  He gets a bath every night and has since he was about 6 weeks old.  Most of the bath is spent trying to keep him in the tub, but he loves to splash around and play with all his toys. 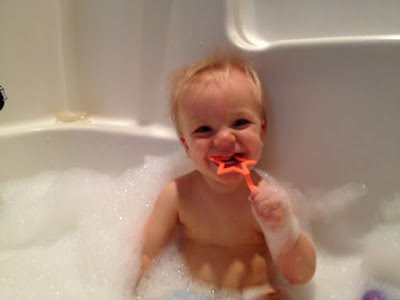 Once I've decided that he's made enough of a mess and he is more interested in climbing out I'll empty the tub and spray him off with the sprayer. He loves it.  Then he's wrapped up in either his puppy towel or his shark towel: 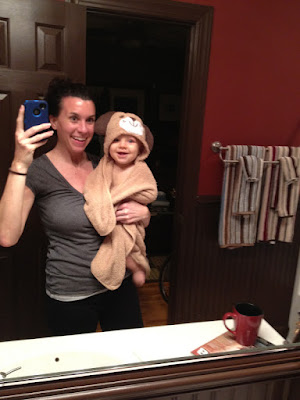 He's a happy camper after bath time.  We take him in his room, dry him off and attempt to get a diaper on him before he can pee everywhere.  He raises hell because he loves to be naked, but once the diaper is on he's back to being happy and crawling all over looking for something to play with. 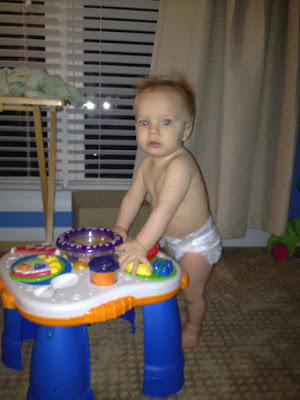 He'll play with daddy for a while until he starts to whine and fuss.  Then he gets lotioned up and we put his jammies on. He raises hell during this time, too, but is fine once he's dressed.  He'll play a little more while I go make up his bedtime bottle. Once he sees it it's meltdown time.  I'll walk into his room and he'll follow me down the hall crying because he's tired and wants his bottle. Yes, I know we need to get him off the bedtime bottle, but we haven't gotten there yet.  I give him his bottle while J turns on the humidifier and fan (for white noise).  Once he's done I try to give his teeth a quick brush and then it's into the crib.  He's always awake when I put him in there and I'll turn on his rainforest crib soother and give him a kiss. This is generally around 8:15 or so.  8:30 at the latest.

Normally he goes to sleep within 15 minutes and for the most part will stay that way until we wake him up around 7:00 the next morning. 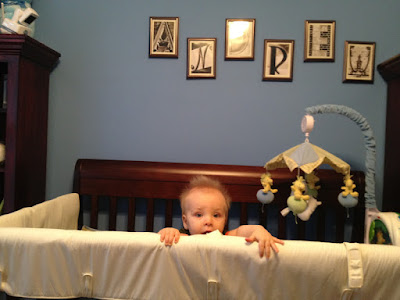 We have been blessed with a very easy baby to put to sleep and a great sleeper.  I have always been so grateful that he sleeps through the night and has since around 12 weeks old. I feel like we hit the lottery with that one!