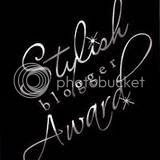 Last week I got nominated for the Stylish Blogger Award by a fellow April 2011 bumpie - the lovely Mrs. Monica @ Scherman Baby: The Sequel.  I was really flattered to know that someone is actually reading some of my ramblings about this whole baby process (and all the other crap I talk about!).  Part of the specifications of the award say that I need to Share 7 Random Things about myself.  So here goes nothing...

1.  I am the youngest of three girls.  I was the last attempt for my parents to have a son and once I came out a girl they called it quits.  Part of me thinks this is why I was such a tomboy growing up - I felt the need to compensate for them not getting the son they were looking for.  Not that they ever made me feel that I was unwanted, but in the back of my mind I always felt bad for my dad. Hell, even our dog was a girl.  Now I am so happy that I am able to provide them with their first grandson.

2.  I was engaged when I was 23.  When I was with him I became adamant that I did not want kids, but when I was honest with myself it was that I didn't want to have kids with him.  In my heart I knew that he wasn't 'the one' and so I called off the wedding with two months to spare.  Probably one of the best decisions I have ever made in my entire life.

3.  I am a HUGE sports fan - particularly Penn State football and the Steelers and Penguins. I grew up just south of Pittsburgh so a love of the black and gold was instilled at an early age.  My husband thinks I am possibly more into sports than he is, but he loves it since we can hang out and watch football without me complaining that I'm missing 'The Real Housewives of wherever' (for the record I hate all those shows).

4.  I'm a gym snob.  I judge the people who are "working out" on the treadmill walking at a pace less than 3 mph.  I judge the girls who show up in their perfectly matched little outfits with their hair all done and their dangly earrings. I hate the people who show up in January due to their new years resolutions to get in shape because they clog up my gym. We call them "the Jan's" and we wait for them to give up in February.  Basically, I get cranky when my routine is messed up, but I feel spectacular after a good workout so I continue to go to the gym and deal with these people.

5.  I have a fascination with sharks.  One of the things on my list of 25 things to do before I die is to go down in a shark cage and I want to see a Great White in person.  They scare the bejeezus out of me, but I think they are amazing animals.

6.  I'm not sure that I truly consider myself a runner, but I normally run several races a year. This is the first year that I haven't done a half marathon in 4 years.  My best time was Kiawah 2009 when I finished in 1:55:50.  My best 10K time was last year's Cooper River Bridge Run with a 51:20.  I was able to knock 5 minutes off my previous year's time and was so excited. I'm sad that I'll miss the Cooper River Bridge Run this year for the first time in 6 years, but it's 8 days before my due date. I'm pretty sure they wouldn't even let me cross the start line!  My best 5K was the Turkey Trot on Thanksgiving 2009 with a time of 25:10.  I was only one minute off that time this past year which I thought was pretty good for being 4 1/2 months pregnant.  I'm already looking forward to getting back to running races once this little bambino is out of my belly.

Another rule when given this award is to award up to 15 other bloggers and let them know of it.  Try not to nominate anyone that the one who sent it to you nominated.  This is tough since most of the blogs I follow have already been nominated.

There is one blogger in particular that I would love to nominate, though, and that is the beautiful bumpie lylahlove because I thoroughly enjoy reading her blog every week.
Posted by kjw at 9:43 AM