Well that was depressing

I went during my lunch break today to try to find something to wear for my parents anniversary party tomorrow night. I had tried on most of the dresses that I already own and it wasn't pretty so I decided a shopping trip was in order.

I didn't want to spend too much money on something that I may never wear again, so I headed to Ross. They generally have some pretty inexpensive things and if you're willing to look you can find some cute stuff.

It must've been hillbilly day at Ross because there were some of the most rednecky white trash people I have ever seen/heard.  This one toothless woman kept yelling across the aisle to her daughter that she needed a "14 wide".  Umm - I think that's 14 Women's - not wide.  Shoes come in wide - dresses do not.  But whatever.

I found 8 possible dresses and headed off to the fitting room.  I began to get undressed to start trying them on.  Let's just say that 33 weeks pregnant + fitting room = depressing.  That lighting and my pale ass skin made it a sorry sight.

Before I could even pull the first dress on the toothless woman was in another fitting room yelling out to her daughter that she needed to be zipped up.  "Where you at?  I need zipped up!  I can't get this thing on!"

I kept mumbling under my breath as I tried on dress after dress and looking in the mirror.  Ugh.  This sucks.  Between the gigantic boobs that give me waaaaay too much cleavage to be appropriate for a 40th anniversary party and my pale arms and legs it was enough to send me running from the fitting room.  It doesn't help that J put too much salt in last night's dinner and I feel like a poofy whale today.

Anyway, I did decide on a dress that hopefully doesn't make me look like something that should be harpooned tomorrow night.  I hauled ass out of there before toothless granny could spout any more words of wisdom, paid for my dress, and headed back to work.  Now I get to go try to find shoes that won't kill my feet after a few hours... 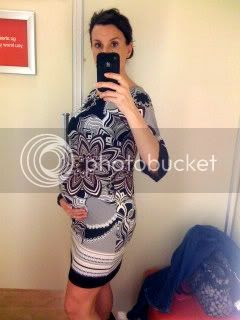