Ok, actually it was yesterday but I didn't get a chance to post about it.

How in the world is my little munchkin already 4 months old?  Is it really possible that he has been here that long?

It seems like just yesterday that we were bringing him home from the hospital with both J and I being excited and terrified at the same time.  We were so clueless then (not that we're all that much better now!).  All we could do was stare in wonder at this tiny little person that we had created.  Of course he didn't do much at the time - just eat, sleep, poop, and cry.

These past four months have brought so many changes.  Now instead of crying all the time, he "talks".  Instead of involuntary smiles in his sleep we get huge grins from him when he sees our faces.  When he's really happy we get the funniest little laughs out of him that make my head hurt because I am smiling so wide.  He is getting such a personality and getting to be so much fun. 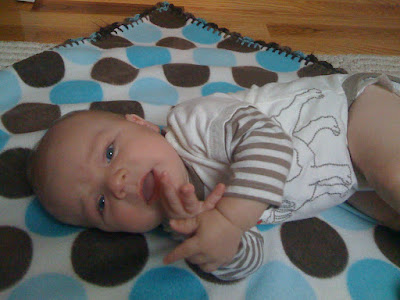 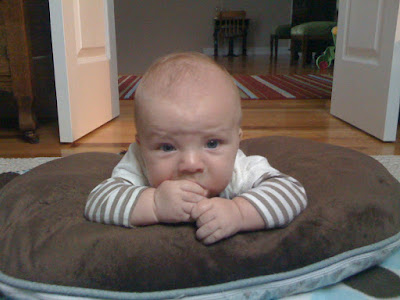 His favorite chew toy - his hands 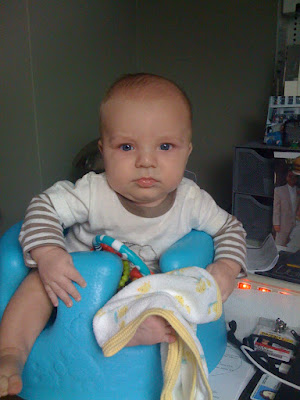 Not exactly sold on the Bumbo just yet 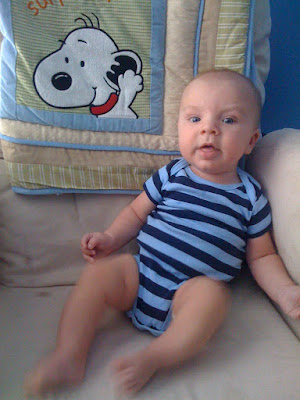 His feet are always a blur in pictures - he won't stop moving!
I love this kid so much and I really can't wait to see what the next months are going to bring.  But I don't want him to grow too fast - I love this little munchkin!﻿
Posted by kjw at 7:30 AM