I know he isn't 4 months yet, but we decided to try cereal this weekend.  Andrew has been freaking hungry lately and we thought maybe it was time.

Before going out and buying it I consulted my sister, the pediatrician.  Yes, this is the same sister who has been kind of a bitch about his name and has only seen him two times in his 3+ months of life.  So yeah, she's been a crappy aunt, but she is a great doctor and I trust her advice.

Anyway, we picked up some cereal and gave it a go. 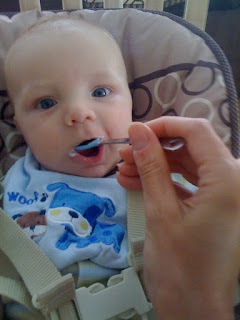 He wasn't sure about it at first, but once we got going he was a big fan. He was actually yelling at me because I wasn't feeding it to him fast enough.﻿
I tried again today and he wasn't overly interested, though.  I guess it will take some time, but at least I know it didn't mess with his tummy and that we can start trying some other cereal in the near future.
Posted by kjw at 10:14 PM