No, I didn't say this to Andrew.  I'm talking about my idiot brother-in-law.

Here's the scenario.  Last night while J was finishing up cooking dinner I was nursing Andrew in his room.  My mother-in-law was sitting outside on the deck relaxing.  She had left her phone in the back room.

Then it rang again.

That's right. Her phone rang 9 TIMES in the span of about 2 minutes.  I didn't even have to ask who it was that was calling so incessantly.

You would think that if someone was calling so urgently that it would be about something important. Like they were just in a car accident or the house is burning down.

Nope. Nothing like that.  This 38 year old man/child just wanted to tell his mom something.  WTF?  Have you never heard of voicemail???

I won't call or text him because I don't want him to have my phone number, but I am about to send him an email and tell him that if he continues to call incessantly like that and he wakes the baby that I will drive up to Charlotte and kick his ass.

But at least I had this little cutie to look at and take my mind off of that moron. 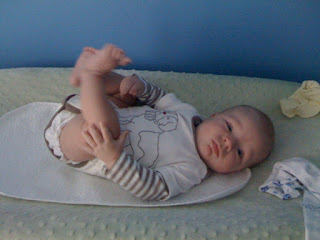