My body, that is.

Yes, that means that we are officially completely done with breastfeeding.  I was down to only nursing  him in the morning when he woke up for the day, but starting last week he would barely even go for more than a minute per side.  Friday morning last week was the last time he nursed at all.  On Saturday (his 14 month birthday) he refused me altogether.  Apparently my minuscule milk stores were not enough for him first thing in the morning.

He'd rather have peanut butter pancakes. 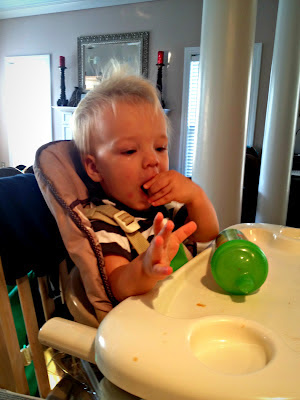 I haven't even attempted to nurse him in the last few days.  He seems ok with it and to be honest, so am I.  It's weird, I really thought I would be sad when we were done.  I was sure that it would hit me hard.  That I would shed at least a few tears upon the realization that he no longer "needed" me - at least for a little snack.

On the contrary it's been a slight relief.  It's less time spent in the morning trying to get him to cooperate and more time hanging out eating breakfast.  I would much rather spend time with the happy pancake monster than the fussy kid who's pissed about not getting enough milk. 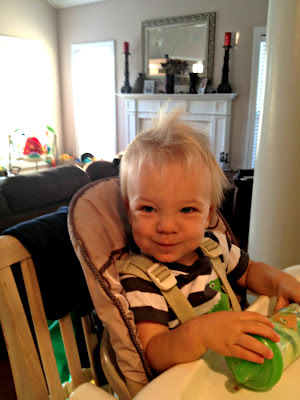 I'm proud of what we did.  We made it to a year with him getting mostly breastmilk (with a little formula thrown in in a pinch). Then at a year he transitioned to cow milk except for nursing in the morning.  Now at 14 months he is totally on the cow and that is just fine with me.

So now my body is all mine.  I've been digging through my drawer to pull out all the cute bras that I haven't worn in almost two years (my already sizable 32Ds got ridiculous during pregnancy and bordering on obscene when they were milk filled).  And I'm really hoping now that milk production can totally shut down that just maybe my body will take the hint and let go of the last couple pounds that seem to have been holding on.  Of course I'll need to have a little willpower to help that out  :)

I will say that it was an amazing journey and I will always cherish the time that we got to spend, just the two of us, quietly rocking in the recliner and cuddling.  I definitely plan to do the same thing with any future child that we may have, but for now I am going to enjoy having my body to myself.

And wearing some cute bras.