J got us tickets to the Charleston Classic basketball tournament being held downtown at the College of Charleston arena since his NC State Wolfpack team is in it.  There are four games Thursday, four on Friday, and then four on Sunday.  That's a lot of games.

We skipped the noon and 2:30 games yesterday - I was at work and his physical therapy ran a little late - but we made the night games.

First up - NC State vs. ECU at 6:00.  We made the mistake of sitting right in the middle of a bunch of crotchety old ECU fans.  Kind of annoying. Especially the old guy behind us that kept yelling "Hey ref!" trying to get the ref's attention so he could heckle him.  My hormones almost got the best of me - I was so ready to turn around and say "I'm pretty sure he's busy right now - STFU!"  But I didn't...

Anyway, the Wolfpack kind of struggled in the first half, but broke the game wide open in the second.  So it was nice to see J's team win.

Here are some shots from our seat: 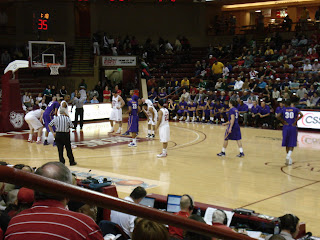 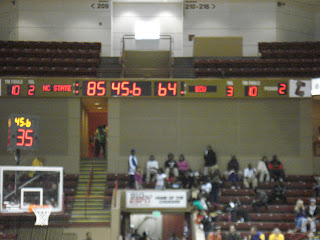 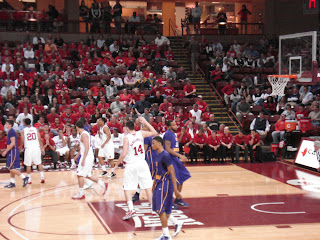 Almost looked like a home game for the 'pack
After that game was George Mason vs UNC Charlotte.  We were rooting for Charlotte, but left when there was 5 mins left and they were down 20 pts.  All in all a fun evening.
Today NC State will play George Mason at 6:00.  I think we might skip the noon game (USC Upstate vs. Coastal Carolina), but will go to the 2:30 game (Georgetown vs. Wofford).  All I know is I need to find a cushion to sit on. This baby is making my tailbone hurt like there's no tomorrow and those seats in the arena are anything but cushy.
So tonight it's more 'Let's go 'pack!'  :)
Posted by kjw at 9:29 AM