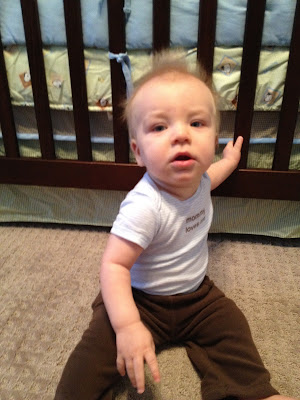 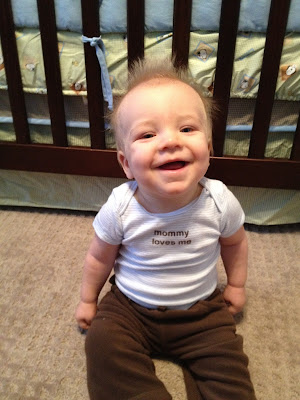 Stats:  Based on his appointment on Jan 4th and where he was then I am going to guess that he is hovering close to 20 lbs and pushing 30 inches.

Size (diapers, clothes, etc.):  Still in size 3 diapers and wearing 9 month clothes.  Some of the 9 month sleepers are getting a little small, though, so I am on a mission to get some 12 month ones with zippers since the snap ones are becoming increasingly difficult to put on him. This kid has NO patience when it comes to getting him dressed.
Sleeping:  He's been sleeping 10+ hours most nights. Every once in a while he gets us up in the middle of the night, but fortunately that is not the norm (as I go find some wood to knock on). Bedtime is around 8:00 and we get him out of the crib around 7:00 on weekday mornings.  He seems to be fighting his afternoon nap a bit lately, but he does still take his two naps a day.

Eating: BF in the morning and evening, bottles of expressed milk at daycare, and a bottle of formula before bed.  He still pretty much sucks at chunky food, but we're making some progress.  He seems to like steamed broccoli and cauliflower, likes to gnaw on steamed baby carrots, loves him some cheerios and pickle spears, and makes a soggy mushy mess out of ritz crackers and animal crackers.  I've started him on some of the stage 3 foods that have more chunks in them. There is still some gagging going on, but he hasn't puked yet. He eats oatmeal and fruit in the morning, has a veggie during the day, and one of the meat things with veggies for dinner.  So far he likes the chicken & apples and the turkey & sweet potato combos.  I continue to give him finger foods each night, too, but so far most of it ends up on the floor/in his seat/in the pocket of the bib. 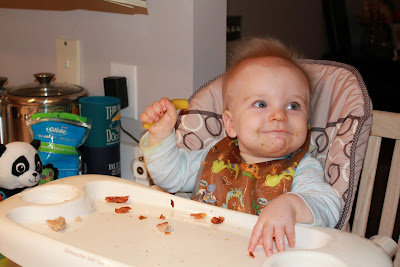 Milestones:  We have a crawler!  He is EVERYWHERE.  Of course he always makes a beeline for the things we try to keep him out of, but I guess we should get used to that.  He has his top two front teeth and it appears that one of the next ones out on the top is about to make it's debut.  He pulls up to his knees all the time, but still no pulling up to standing.
New adventures:  Taking him to the playground and pushing him in the swings. He LOVES to swing. Several birthday parties with lots of other kids.

Favorite toys and activities:  His new favorite thing in the car is a plastic water bottle that J flattened and put the lid back on. He likes the crinkly sound the wrapper makes and he likes to smack things with it.  He now loves to open the bottom drawer in the kitchen and pull out the plastic/rubber cookie cutters that are in there. And when I want to get a smile out of him I pull out the Sing-A-Ma-Jig and he cracks up. (Yes, it is a toy for 3+, but he only gets it when I play with it to distract him or make him smile).  He also likes his Fisher-Price Lil’ Zoomers Shake & Crawl Racer that my oldest sister got him for Christmas.
Funny happenings:  This past weekend J and I went to run the bridge. It was the first time I had run it in about 18 months. It was super windy so I was grateful that I was not the one pushing the stroller. When I looked down at Andrew he was sitting here with this surprised expression on his face and was holding onto his hood to keep it on his head.  Then he pulled one of his socks off and passed out for the remainder of our 6 mile run.

What I'm looking forward to:  We're going to the big oyster festival at Boone Hall this weekend, which should be a good time
Posted by kjw at 9:52 AM