Yesterday the weather was beautiful.  60 degrees and sunny - the perfect weather to do something outside.  Since it was going to be such a gorgeous day (and J had scored some free tickets from one of his vendors) we decided to take the little munchkin out to Boone Hall for the annual Lowcountry Oyster Festival.

Gates opened at 10:30, but we didn't get to leave the house until 11:15 due to a napping munchkin.  We knew there would be traffic, but we were not prepared for it to take 2 whole hours to get in.  Keep in mind that Boone Hall is less than 7 miles from our house.

Luckily Andrew was pretty agreeable in the car and didn't have any major meltdowns. I hopped into the backseat to entertain him after the first hour in the car and we had a good time as I tried to keep my mind off of my bladder that was about to explode.

We finally got into the parking lot and got all of our stuff gathered up for the long ass hike to get to the front gate.  Once we got in J went and got some tickets so we could get some food and drinks and then we high-tailed it to the bathroom.  After attempting to navigate the massive crowds with the stroller and me carrying the chairs we decided to just set up camp in a less crowded area so Andrew could get out of the stroller and crawl around.

I had brought several toys for him, but he was more interested in J's empty beer cup.  I rinsed it with water and let him have at it: 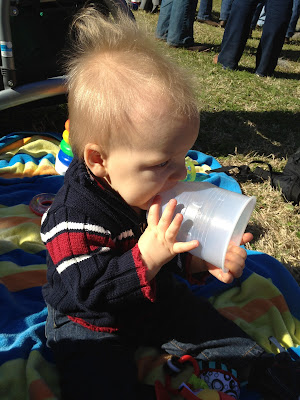 We got several comments from passing strangers about how cute he is and of course more comments on his out of control hair. 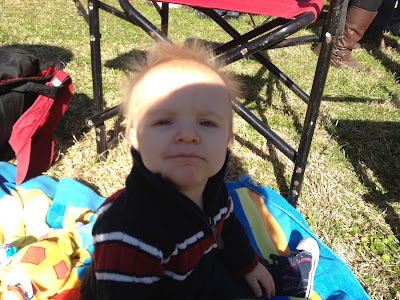 "Yeah, I'm cute."
We did a little practice standing: 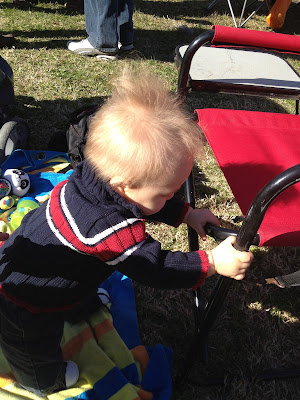 And all in all had a good time. 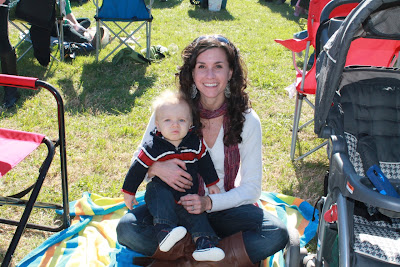 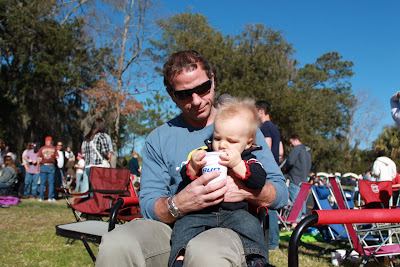 We decided to get out of there around 4:45 so we could beat the rush of people leaving when it ended at 5:30.  It took us 12 minutes to get home.

Yeah - unless the rocket scientists who are in charge of the traffic and parking set-up change back to how they used to have two entrances instead of funneling 10,000+ people into one entrance we will not be attending next year.  I don't need to sit in traffic for two hours just to go hang out in the sun and not eat oysters - we can do that at home in our back yard..
Posted by kjw at 10:45 AM