Yesterday we had Andrew's 9 month appt (at 9 months 10 days).  My plan had been to work from home for the day but still take him to daycare.  Well, at 6:17 AM I got a text from Andrea that their heat broke during the night and daycare would have to be closed.  Luckily I already had my computer and everything at home so it wasn't that big a deal.

I emailed my boss to let him know I would get in whatever hours I could since I had the munchkin home with me.  So glad my job is flexible!

Andrew decided to help me out and slept for 12 hours and 17 minutes before he woke up at 8:30.  He nursed a little, I fed him some oatmeal and pears with cinnamon, and then plopped him down with some toys so he could play for a bit while I got a little work done.  Shortly after I got back to work I heard paper rustling. 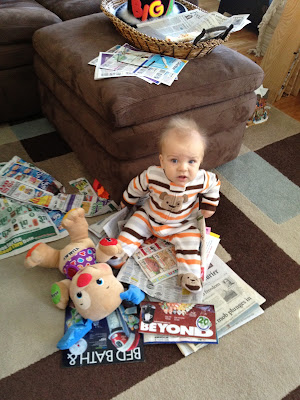 Obviously he would much rather play with newspapers and ads than with his toys  :)

At 3:00 we headed to the doctor. We got him all weighed and measured and the nurse filled out his info in his little book.

When Dr. Graham came in for the rest of the check I asked him if I should be concerned that his weight percentile keeps dropping.  He told me that it is perfectly normal for a baby to slow down with the weight gain as he grows.  He had a big jump in the beginning (once we got him to start gaining) and has since slowed down.  He told me that Andrew is absolutely perfect (something I already knew but it was nice to get validation ;)  ).

We talked about how much he is eating and that he still isn't great with the finger foods.  He assured me that is also very normal.  Some babies just take longer to get the hang of it.  He loved Andrew's curiosity, asked me if he is experiencing any separation anxiety (thankfully that's a 'no' so far), and he watched him play with all the toys.  He again said that Andrew is perfect and that he would see us for the one year appointment in a few months.

Ugh - to think in less than 3 months my little munchkin will be a year old. Time is moving at warp speed and I can't seem to slow it down.  I guess I'll just have to enjoy every second of it that I can.
Posted by kjw at 10:52 AM