When will the puking stop?

No, the little munchkin isn't sick.  In fact he is perfectly fine and happy and crazy as ever.

What he isn't doing is eating.  I mean, he eats baby food purees like there is no tomorrow. He loves them. When I am trying to scrape some of it off of his face with the spoon he chases the spoon around with his mouth because he wants more.  This kid is a big fan of eating. 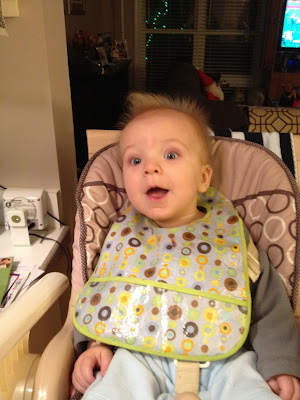 It's when I give him "real" food that we run into a problem. That latest instance was on Saturday when I gave him a few chunks of banana.  I figure it's soft and he can mash it in his mouth and eat it.

He did get some in his mouth, but as soon as it moved even a little bit towards the back of his mouth he gagged and proceeded to puke up what seemed like every little bit of the green bean puree he had devoured just a few minutes earlier.  It wasn't pretty and I will spare you any pictures of the grossness.

Anyway, this is a normal occurrence for us.  We've been trying different finger foods with him seemingly all in vain.  While he does fantastic with the puffs and mum mums (since they melt) any other food that makes it into his mouth either instantly gets spit out or triggers another puke-a-palooza.  Even mashed potatoes on Thanksgiving, which for all intents and purposes was just thicker baby food puree.

I know we need to keep trying and we will. Eventually he'll "get" it.  And when he does I have a feeling that we won't be able to keep food in front of him.  But for right now I guess I have to resign myself to mopping the floor under his highchair on a regular basis and invest in some more of those bibs with the pocket at the bottom to catch more of the fallout.
Posted by kjw at 12:31 PM