Last night it was time to give the pooches a bath. We'll be heading up to Charlotte this weekend and I didn't want them stinking up my new car.  Plus they were just starting to smell a little ripe - being big dogs I think they get particularly stinky.

First up was Boone, our chocolate lab.  I love Boone, getting him was my idea since I thought Baxter looked lonely.  But I have to admit, this dog is just nuts.  He is a beautiful and he is sweet, but there is just something wrong with that dog!  He reminds me of Marley from Marley & Me.  We met the mom when we picked him out, but not the dad. Something tells me they didn't want us seeing how nuts he was.  Either way, Boone got plopped in the tub and lathered up. 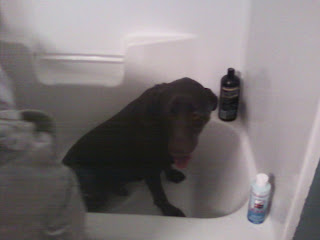 He's a lab so of course he loves water, but he isn't overly fond of having it poured on his head.  And he is incapable of sitting still, so keeping him in the tub is always an interesting feat.

Once Boone was washed and toweled off (with towels fresh from the dryer so they were nice and toasty) we put him in the crate (so he wouldn't get on the furniture all wet) and it was time to get Baxter.

Baxter is our yellow (almost white) lab.  He is 10 years old and quirky as hell. I have never in my life seen any animal so particular about where he poops.  When you aren't in a hurry to go somewhere it can be quite comical, but when the clock is ticking it can be somewhat infuriating.  Regardless of his quirks he is a very sweet and lovable dog.  He's also quite big (pushing 100 lbs) so lifting him into the tub is not easy. 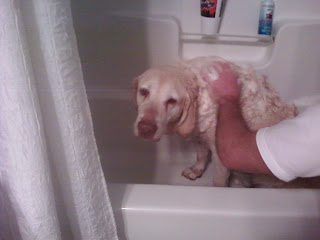 Baxter is much better about sitting still for his baths (I think he mellowed with age), so his bath time isn't as bad.  I think he likes the full body massage.  We had to pay special attention to his ear since he ripped a piece of it off last week.  We didn't know about it until it was too late to do anything about it.  And we couldn't find the chunk of ear so all we could do is make sure it's clean and heals without getting infected.  Needless to say he will not be in any doggy calendars with his war wounds.

After bath time they were content to cuddle up on their dog beds and take a snooze.  And I'm happy that they aren't so pungent and won't totally wipe out my new car smell. 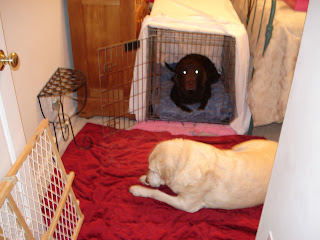