On the plus side we got the office rearranged yesterday to make room for the glider and pack n play since our little man will be sleeping up there for the first couple months of his life.  We got rid of lots of junk so it was nice to clean it out.

We also probably decided on a paint color for the walls of the nursery and we spent an hour or so sanding the ceiling in the nursery yesterday.  What a mess!  It wasn't super hard work, but we both looked like we had been dropped in a pile of flour by the time we were done. Even with the masks I think I inhaled a ton of that crap. And my eyes felt gritty for a couple hours afterwards.  But I think it looks good so far and there isn't much the needs to be patched.  J was in there this morning covering some screw holes that he'll go back and sand later.  Here is a picture of what it looks like at the moment: 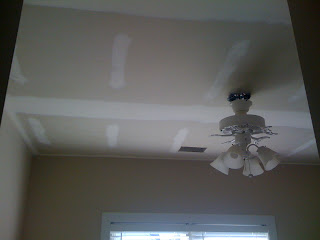 He also decided he wants to put up crown molding so we don't have to worry about the rough edges. This means yet another trip to Lowes.  And yet another thing to paint. Ugh.  But I think it will look really nice when it's done so I shouldn't complain.

Oh, and another new development. I feel like he is now trying to dig his way out of my uterus.  I don't know if he just switched positions or what, but he is now giving me lots of pokes, prods, kicks, and punches on the left side of my belly. It kind of tickled and felt really odd last night. I guess I should get used to that, huh?
Posted by kjw at 3:22 PM