Wow. How did this happen?  How did I already pass the 30 week mark?

It seems like just yesterday that I was peeing on a digital test in my work bathroom in an attempt to confirm the very faint lines I got on the internet cheapie tests that morning.  And now here we are - less than 10 weeks to go.

There is a little part of me that wants the next 10 weeks to fly by so I can stop being uncomfortable and hold our little man in my arms.

There is a bigger part of me that is thinking "Holy shit - in less than 10 weeks I am going to be responsible for keeping this little person alive!".  That and "We still have soooo much to do to prepare for this little guy's arrival!".

We did make a little progress on the nursery this weekend.  On Saturday J was mudding the ceiling in the closet. Since we won't be doing crown molding in there he had to give a little TLC to the edges in there after scraping the hideous popcorn.  We also cut out and removed the old carpeting. I could not believe how much dust was under it. I don't think the builders vacuumed up all the drywall dust before laying the carpet 13 years ago. Nice.

So here is what it looks like at the moment: 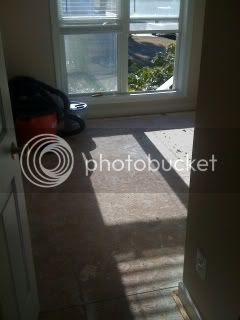 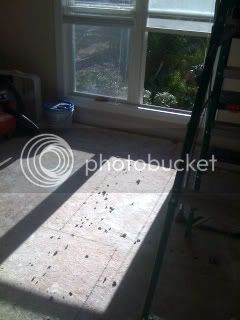 We chucked the old carpet and padding out that window instead of dragging all the nastiness through the house.

Apparently J's parents are going to come down this weekend and they are going to work on the nursery while I am in Dallas.  He wants to get the crown molding up before they get here so they can paint the ceiling. And he wants me to pick out the wall color so they can hopefully get the walls done as well.  Before they leave he wants them to help move all the furniture and crap out of the guest room so he can scrape that ceiling and rip out the carpet as well.  That way we can get carpet installed in both rooms at once and be done with it.  Not quite sure where we are going to put all the stuff, though.

Yesterday we took a break from house stuff and went to the 28th Annual Lowcountry Oyster Festival at Boone Hall Plantation.  It's held every year on the Sunday before the Super Bowl. Sometimes the weather can be a little iffy, but this year it was gorgeous. Sunny and 70 degrees.  I of course did not partake in the oysters and beer (had to settle for two bottles of water and a burger), but it's still a fun event.  And hey - at least this year I'm not hungover for work on Monday! 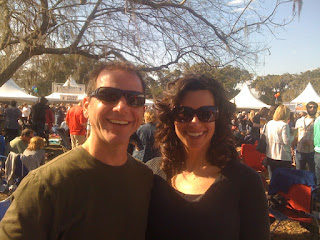 J and I hanging out enjoying the sunshine 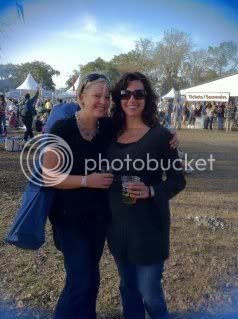 I was holding his beer while he packed up the chairs and J thought it would be funny to snap a picture to post on FB.  Needless to say I had to comment the disclaimer that it was NOT my beer!
﻿
All in all it was a busy weekend and as usual it went way too fast.  I need a vacation...﻿
Posted by kjw at 8:29 AM